Thousands of Indians lead silent revolutions against the things that ail society. Three of them have been recognised for their efforts by the Queen. 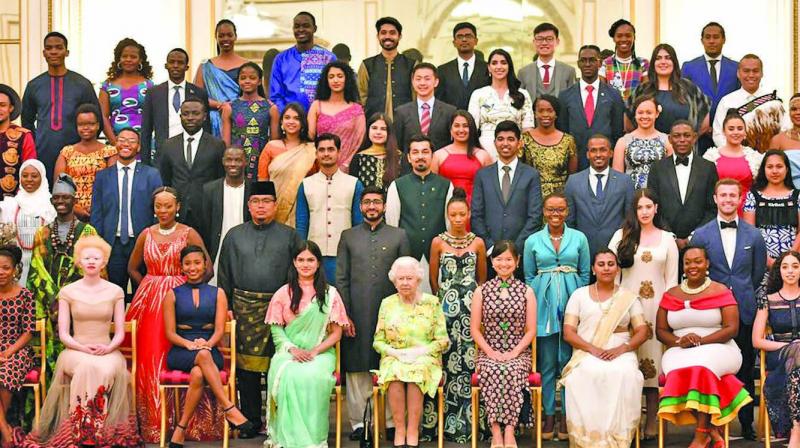 60 young achievers with Her Majesty The Queen Elizabeth II

Everyone has a purpose in life — a unique gift, a special talent. And there’s nothing more rewarding than being able to use our talents to serve others and change people’s lives. Perhaps that’s what drives 24-year-old Deane de Menezes, 27-year-old Aditya Kulkarni, and 27-year-old Trisha Shetty – the three Indians who were among the recipients of the Queens’s Young Leaders Awards for 2018.

Every year, Britain’s Queen Elizabeth II recognises exceptional young people who are transforming their local communities and honours them for their achievements. The prestigious Awards programme celebrates exceptional young people from all over the Commonwealth, and the work undertaken by them to improve lives by addressing a diverse range of issues including gender inequality, mental health and access to quality education.

The award ceremony for this year’s winners was held at the Buckingham Palace on June 27. Prince Harry, his wife Meghan Markle, and footballer David Beckham were some of the popular faces who made an appearance.

“I was informed that from over 4000 applicants, 60 had been chosen to receive the Queen’s Young Leaders Awards, and I was one of them!” says Deane, one of the three winners from India. She is the founder of an organisation called Red is the New Green, which is working towards increasing awareness about menstrual hygiene in India. “I founded the organisation two years ago to tackle the social stigma and economic inequality attached to menstruation through sustainable solutions,” she says.

Aditya a former computer scientist at ISRO, was chosen in recognition of his work towards developing a mobile health solution to reduce maternal and child mortality in areas with limited access to health resources through his start-up CareNX. “Our product CareMother has been operational in 9 different states with 15+ partner organizations, and it has provided pregnancy care to 30,000+ pregnant women in last 3 years. It has also created jobs for 300+ women healthcare workers,” Aditya explains.

A women’s lawyer by profession, Trisha Shetty’s passion is promoting gender equality. She is the founder of SheSays, a youth-led organisation that aims to end sexual violence and improve education, healthcare, and sanitation, and inform public policy. “We work towards offering on-ground support to anyone being subjected to any kind of sexual abuse or harassment across the country,” Trisha says.

Needless to say, the three young leaders were thrilled to receive the award from Her Majesty, the Queen. They also had the opportunity to participate in a week-long residential programme at the Buckingham Palace. Still jetlagged and overwhelmed by the experience, Aditya says, “I feel humbled and honoured. The award is for my team, and not just for me.”

Deane can scarcely contain her enthusiasm. “It was wonderful meeting the Queen. She immediately put me at ease and spoke to me about my work and how important menstrual hygiene is. She is remarkable! For her age, she is absolutely full of energy,” she gushes.

Interrupting her, Aditya chimes in, “I remember she said that she recalled reading about the CareMother project. She asked me to continue doing good work in the future.”

For Trisha, the best part of the experience was getting to meet other inspirational young leaders. “As a social activist, I work best when surrounded by inspiring young citizens who are building a movement of solidarity, I told Queen that we work in India and she said its lovely,” she says.

Deane predicts that these achievers from the Commonwealth will be the great leaders of the future. “All of them are contributing their best in their respective fields. Without a doubt, leaders, prime ministers and presidents will emerge from this outstanding group of people,” she says.

Of the three, only Deane managed to have a private chat with the Queen. Recalling the conversation she says, “We spoke about menstrual hygiene. She was very keen to know more about the project and the work we do in India.”

The recognition of their efforts has motivated Deane, Aditya and Trisha to continue their work with even more vigour. We have no doubt that there are even bigger and better things to come from them.