All 10 episodes of this series sensitively discusses things that every teenager goes through and every adult doesn’t necessarily understand. 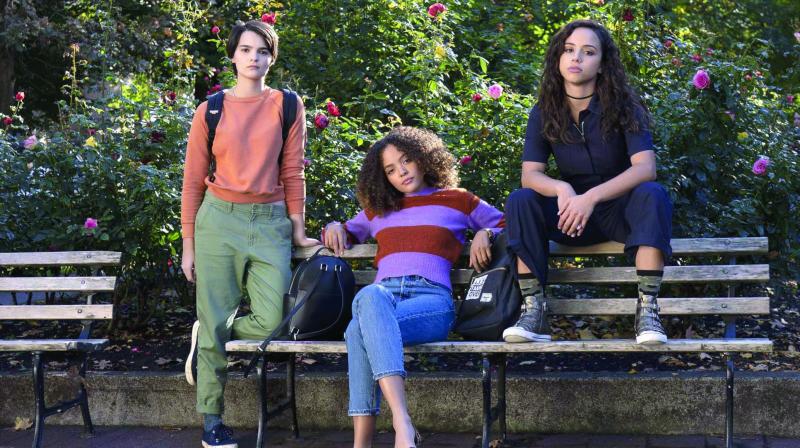 A still from the series Trinkets

The group of friends that you make during school will stay with you forever. You bond with them over a similar factor you share. Be it fashion, travelling, music and even books! But in Netflix’s Trinkets which is based on the book  by Kristen Smith, three girls bond over a very unusual factor. They are all shoplifters! Weird right? Well that’s what makes it a fun watch. There are no over the top cliches like girls shrieking in delight just because they found the perfect sweater or lip gloss. It’s a story about three girls and how they deal with the pressures that comes from being  teenagers.

Trinkets deals with topics like school and family pressures, love, bad decisions, abuse, boyfriend troubles, LGBTQ (done very subtly) and being teenagers in general. We are introduced to Moe, Elodie and Tabitha are as different as colours like red, blue and green. They don’t have anything in common expect for the fact that they meet at a Shoplifters Anonymous Meeting. Moe is punk-chic who sets her own rules. Elodie is an introvert who is recovering from her mother’s death in a car accident. Tabitha is the popular girl who has everything going for her. The perfect boyfriend, rich parents and the perfect friends.

So why do they all shoplift? It is part of escapsim to run away from the problems they  face. When they meet first, you would never think that they would end up as friends. But as the series evolves, they confide in each other, have fun and indulge in mischief too. But one bad decision threatens to drive them apart. They crash a car into the river. Whose car is it? And why did they do it?

We are also introduced  to the love interest of the three girls – Sabine, Noah and Luca. Who in their own way, play a small but significant part in their lives. What doesn’t work for show is that fact that it doesn’t particularly follow one plotline. Rather, it deals with a lot of stuff and leaves you confused trying to decipher the storyline.

But having said this, the show does have factors that make it a binge-worthy watch. The bond that grows between the three girls will make you reminisce the time, you spent with your friends. All 10 episodes of this series sensitively discusses things that every teenager goes through and every adult  doesn’t necessarily understand.

Season one had a very open ending. It is quiet unclear as to what will happen next. All of this will be answered in Season two which we will have to wait for a bit to watch.