This discovery is included within basic science, at the interface between biology, mathematics and physics. 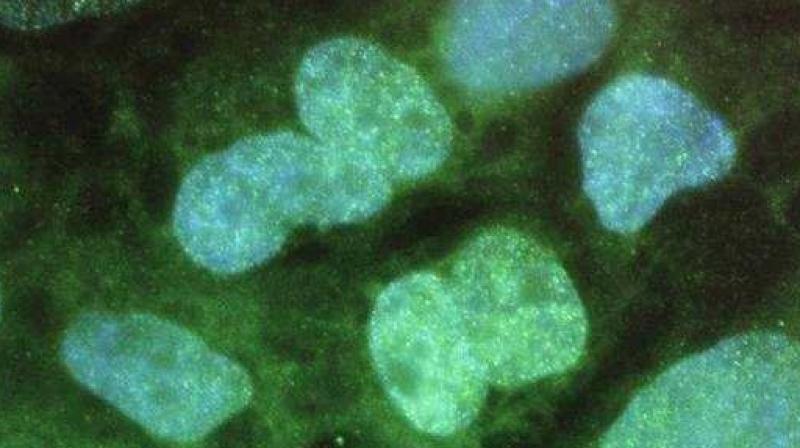 Epithelial cells, which cover the surfaces of many organs, adopt a previously undescribed geometric shape - the scutoid - so that the tissue can curve, scientists have found.

The epithelial cells adopt this form which looks like 'twisted prisms', according to the research published in the journal Nature Communications.

These new and beautiful shapes are the solution that nature has found to fold and curve the epithelia, which lines the outer surfaces of organs, researchers said.

"The epithelial cells are the construction blocks with which an organism is formed. They are like 'pieces of Tente or Lego from which animals are made,'" said Luisma Escudero from the University of Seville in Spain.

The epithelia form structures with multiple functions like forming a barrier against infections or absorbing nutrients.

During the development of an embryo, it changes from a simple structure formed from only a handful of cells to an animal with very complex organs.

"This process doesn't only occur because of the growth of the organism, but also because the epithelial cells start 'moving and joining together' to organise themselves correctly and give the organs their final shape," said Escudero.

Until now, these "blocks" were represented as being prism-shaped or being like truncated pyramids.

However, upon examining epithelial curves in laboratory samples, the researchers found evidence that these real cells adopt other more complex shapes.

"This is due to the fact that when tissue curves it tends to minimise energy, to be more stable, and for that reason our biophysical data indicates that what these cells do is adopt an scutoid shape," said the researcher.

A scutoid is a solid geometric shape, like a cube or a pyramid, which had not been described until now.

The epithelial cells adopt this form when the tissue curves, giving it a more stable structure. It could be said that they look like 'twisted prisms'.

"This discovery is included within basic science, at the interface between biology, mathematics and physics. However, this type of research is necessary for biomedicine," researchers said.

This study opens the door to understanding how organs are formed during their development and what might be missing in some diseases in which this process is altered.