Ahead of Ganesh Chaturthi, local artists and committees are putting final touches on their Ganpati idols, made of some extraordinary items. 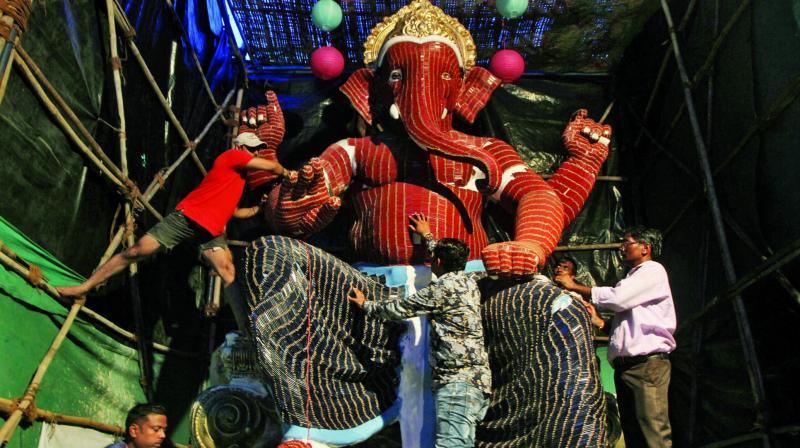 Idol made of Pencil

In 1882, when Bal Gangadhar Tilak revived Ganesh Chaturthi as a platform to spread the message of freedom in Maharashtra, the festival transformed into a religious ritual among locals, as well as a social function of the state. Since then, Ganesh Chaturthi is celebrated with the utmost pomp and splendour every year. Families bring home lavishly decorated idols and then immerse them in water bodies with beats of the dhol and tasha in the background. But beneath all the festivity lies the centre of the show: The Ganesh idol. With constantly increasing consciousness towards nature and creativity, Mumbaikars are using their creative instincts to build Ganesh idols like never before. 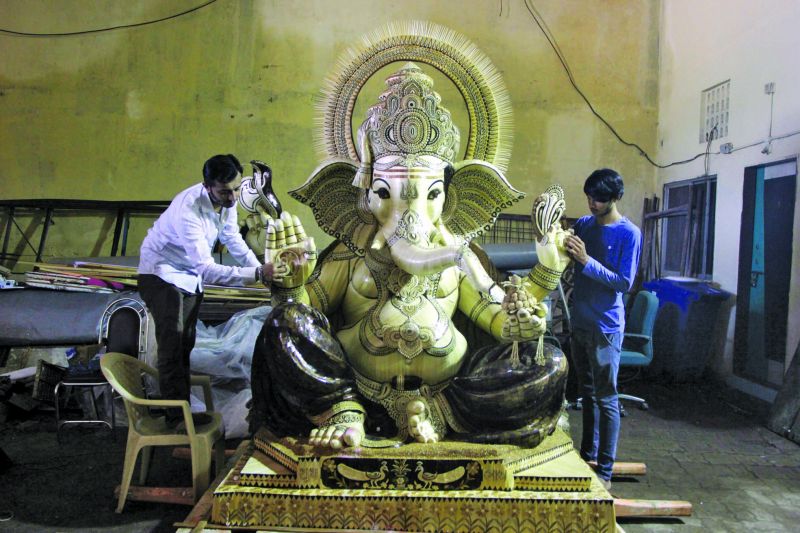 Idol made of Bamboo sticks

On the list is Malad East-based Yuva Group Mitra Mandal, which had artists come in and make a Ganesha out of bamboo sticks. Gujarat-based artist Arjan M Solanki, along with other six family members, has worked for over a month to create the nine-foot idol. “There was a time when even houses were built with bamboo, but these days people don’t even know about it. So we want to create awareness about this product, which is almost disappearing,” says Vipul Sagar, director of the Mandal committee. 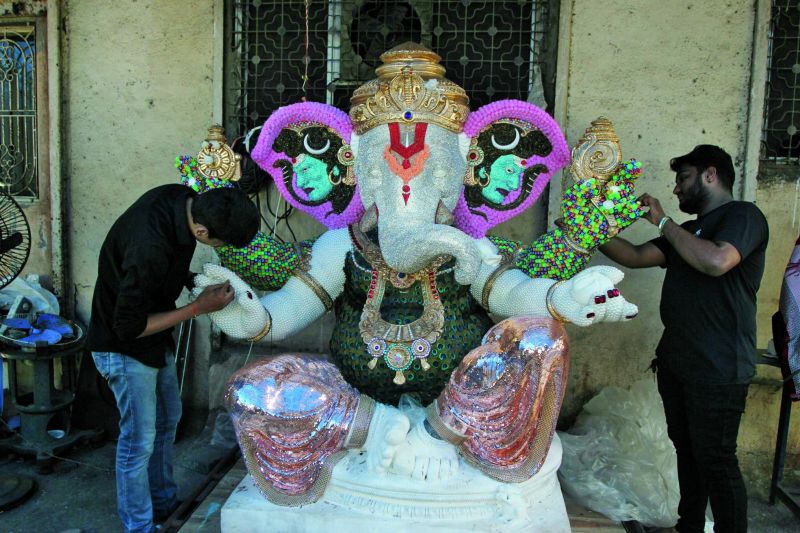 Idol made of Nine concepts

Similarly, a group of six artists in Sapurpada colony is working hard to create a 14-foot-tall red and navy blue Ganpati sculpture out of pencils. “We have used almost 15,000 pencils and it took us one month already,” says artist Umesh Chawan, who uses new themes to makes the idols every year.

A Kandivali based community, which has been making Ganpati idols for over 40 years, follows a similar idea — this year, eight artists from the area have made a 14-foot idol using 51 kilos of sweet corn. Built in more than 25 days, the artists are using special halogen lights to give the corncobs proper ventilation. “We have devotees coming from far and wide, so we need to make it interesting for them. They actually know that they will get to see something new every year,” says Mahendra Pote, the organising committee member. 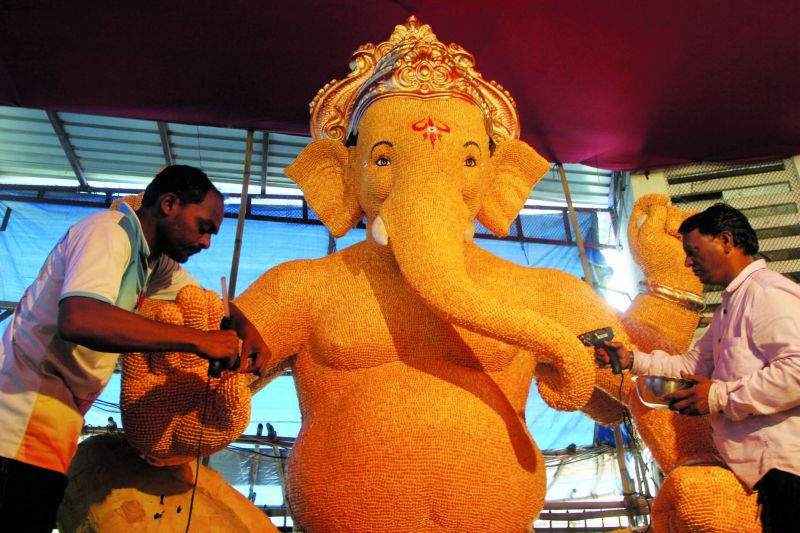 Idol made of Corn

Another idol in the city has the unique element of Lord Shiva carved on both the ears of the Ganpati. “We just wanted to make it look more creative, so we included lord Shiva in the idol,” says Chirag Patel, whose team has incorporated nine concepts in a single six-and-a-half-foot tall idol. The team of eight artists have used concepts like mirror sheet, pearls, peacock feather, rainbow, diamond chain, chocolate, and home flowers, among others for this idol. “These themes were used for our idols in the last nine years, and we just combined them all for this year’s Ganpati,” he reveals.

Meanwhile, Shekhar Mistry, known for making idols of natural resources, is using thread to create a seven-foot-tall Ganpati this year. The artist, who has been doing this for over 10 years, is using over 4000 meters of silk and cotton thread and has used five different colours. “Every year, I try to make a Ganpati that doesn’t harm nature. I mostly use food items, which can be eaten by the marine animals when the idols are immersed,” shares the artist.

It appears that city locals are going beyond their comfort zones in order to break conventional ideas of Ganpati idols, which have typically been made of Plaster of Paris, coconut and other organic products. While the artists put a lot of efforts into deciding the themes and showing off their creativity, the idols made of natural products demand a great deal of maintenance from production to immersion. 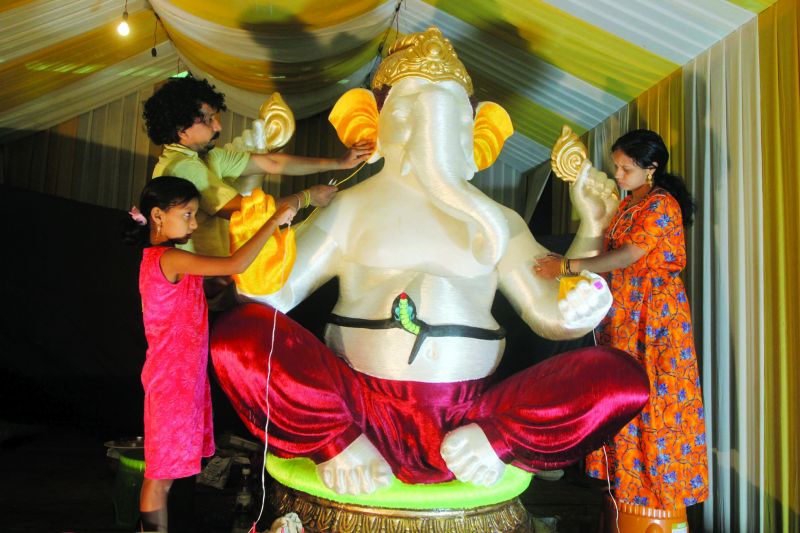 Idol made of threads

“We are maintaining a particular temperature around the idol, and also keeping it in the shade to avoid rainwater,” says Vipul. Umesh adds that he is applying varnish on the idol to keep all the pencils intact.