People left flowers and testimonials to pay homage to the deceased and the first responders who worked to rescue the survivors. 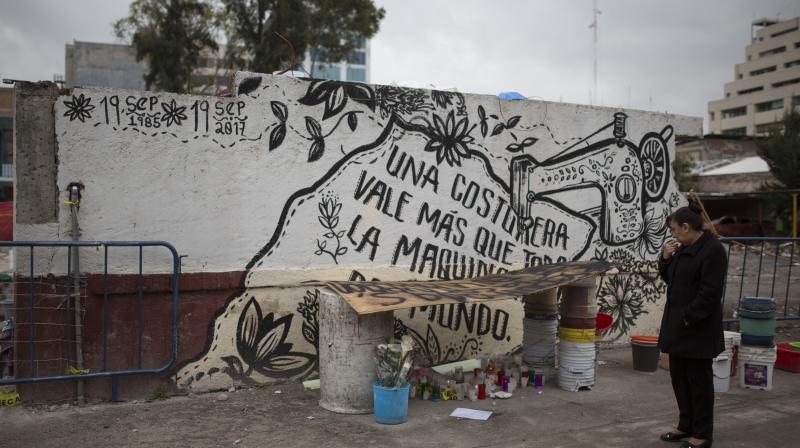 People left flowers and testimonials to pay homage to the deceased and the first responders who worked to rescue the survivors. (Photo: AP)

On sidewalks, on median strips and amid the brick dust and rubble of buildings that collapsed in Mexico's magnitude 7.1 earthquake, impromptu memorials have sprung up across the capital as it begins to come to terms with its losses.

It is part of a process of grieving, remembering and paying homage to the victims as well as the volunteers and first responders who toiled for days to rescue survivors and recover the bodies of the more than 350 people who died.

In front of the campus of the Tecnologico de Monterrey on the south side of Mexico City, people arranged stuffed plush toys of rams — the university's mascot — in piles under hand-lettered messages to five students who died September 19.

Isaias Medina, 33, visited the memorial with his wife, young son and daughter this week. Medina's children attend school steps away from the campus, and when the quake struck he rushed to pick them up. They were safe, but falling walkways and walls killed the five college students.

"I was very sad to see the buildings all cracked up in places," Medina recalled.

"For us, as a family, there is sadness. What happened is a tragedy that you feel in your heart, your soul," he continued. "But now let's move forward. As they say, 'Be strong, Mexico,' and we'll get through this."

To the north, white flowers and wreaths piled up at a previously existing statue of a family a block or two from where a wing of a school building collapsed, killing 19 children and seven adults. Some had taped images of Roman Catholic saints and psalms to a wall, and star-shaped balloons and stuffed animals topped the statue.

The plight of the children trapped in the Enrique Rebsamen school became an international focus of attention during the rescue effort, and messages of support poured from abroad — including from one of soccer's biggest stars. Lionel Messi, of the Barcelona club, recorded a video dedicated to Leonardo Farias, 8, who was rescued from the school.

"Hello Leo. I wanted to send you a big hello and wish you all the luck. Take good care of yourself."

At the site of a six-story apartment building that collapsed, killing a dozen people, someone spray-painted on a sheet of plywood fencing: "To the neighbors of 32," a reference to the street address. Also scrawled on the barrier were the first names of those who died in the building.

On Peten Street, where a seven-floor apartment building collapsed, volunteers left construction helmets they had used during rescue efforts atop a flag at a shrine on the now-cleared lot.

"It is an honour to work with the marines, the city and federal police, students and civil society, all for one purpose," a volunteer had written on one white helmet.

Where a five-story office and factory near the city center once stood, the rubble has now been cleared and all that's left is a concrete foundation that traces the building's footprint.

People left flowers and testimonials scattered among the five-gallon buckets that were used to carefully remove debris in the first days of the rescue. Colourful strips of cloth memorialized the clothing workers who died there, along with a banner reading "Not one more woman."

"The life of one seamstress is worth all their machines," read a message painted on the last part of wall still standing.