It wasn’t as toxic a gas chamber this time, but the city still has a lot to learn. 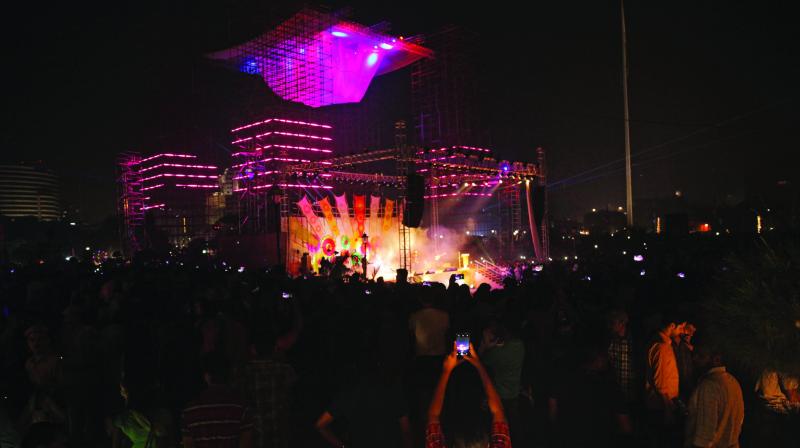 A glimpse of the four-day laser show that the Delhi Government staged at Connaught Place.

The capital welcomed the festival of lights with the usual Diwali spirit: strings of light across markets, displays of clay diyas lining the streets, evenings of glitzy Diwali parties and, of course, a telltale blanket of haze over the city.

Here in the capital, the season’s greetings often bring with them new readings on the Air Quality Index (AQI). A Reuters report declares that, on Diwali, the AQI numbers hit 500 in parts of the capital, which is an incredibly hazardous. However, the Central Pollution Control Board placed the PM2.5 — a dangerous pollutant that makes the environment much more harmful — at 289, shining a ray of hope with the relatively small number. Over the last four years, the PM2.5 numbers have never been this low.

Delhiites seem to agree on the decline. Savita, a roadside entrepreneur who sells clay diyas along the streets of Malviya Nagar, reveals, “We couldn’t find fireworks this year, but we still enjoyed Diwali. I also felt that the pollution levels were much less than what they were last year.” Savita believes that perhaps Delhiites are celebrating in greener ways, since her clay diyas saw a handsome profit margin this season.

And, yet, in many areas of the capital, a Supreme-Court-directed ban on fireworks seemed to do little to curb Delhiites’ sentimental attachment to firecrackers. Aanchal, a 20-year-old student from JNU, observes that little kids in her residential area, “found firecrackers and burst them till three in the morning — to the extent that I felt breathless in the middle of the night.” Aanchal hopes that people burst fewer firecrackers next year.

While the night of Diwali was tuned to the sound of crackers, the Delhi Government did take cognizance of the rising AQI figures and, in a first, organised a ‘community Diwali celebration’ at Connaught Place from October 26 to 29. A completely green initiative, it boasted musical performances, food stalls and a grand laser show. Additionally, CM Arvind Kejriwal also announced the implementation of the odd-even rule in the city from November 4 to 15, in an effort to fight the pollution.

On a concluding note, Anita Malik, a Delhi-based artist, talks fondly of a tradition that is rather unique to Delhi: “On Diwali, we go to our loved ones’ homes and light diyas. In fact, this tradition is prevalent in villages around Delhi as well.” As an afterthought, she says with a chuckle, “But this tradition of giving each other expensive gifts is also a baneful Diwali norm characteristic to Dilli.”