This is the first time the eastern abyss has been surveyed, providing an opportunity for scientists to collect baseline data. 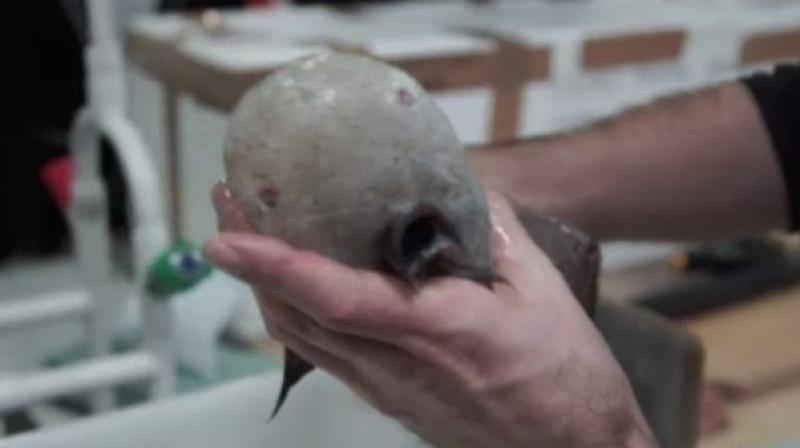 The data from the voyage could be used to measure the impact of climate change (Photo: YouTube)

Melbourne: A 'faceless' fish and other bizarre and wonderful creatures, many of them new species, have been discovered during a world-first exploration of a deep-sea abyss off Australia, scientists said today.

The crew onboard the Commonwealth Scientific and Industrial Research Organisation (CSIRO)'s Investigator vessel are surveying marine reserves from northern Tasmania to central Queensland during a month-long journey.

Scientists are towing small nets and an underwater camera deep inside the eastern abyss, which reaches depths up to four kilometres.

Di Bray from Museums Victoria in Australia said the finds had so far ranged from curious to bizarre.

"We have seen some awesome stuff. On the video camera we saw a kind of chimaera that whizzed by - that is very, very rare in Australian waters," she said.

However, the crew caught a very unusual "faceless fish" off Jervis Bay last weekend at a depth of 4,000 metres, 'ABC News' reported.

"That is kind of the highlight so far for us. Apparently, it has got eyes way under the surface but really you can not see any eyes," Bray said.

This is the first time the eastern abyss has been surveyed, providing an opportunity for scientists to collect baseline data about its biodiversity.

Chief scientist on board the Investigator, Tim O'Hara said that the search area was the most unexplored environment on the Earth.

"It is an unusual life. Down there it is crushing pressures, there is no light and it is really cold, we are recording temperatures of about one degree Celsius," said O'Hara.

The data from the voyage could be used to measure the impact of climate change in decades to come, researchers said.