In video: Fisherman catches 400-pound shark off coast, releases it back in wild 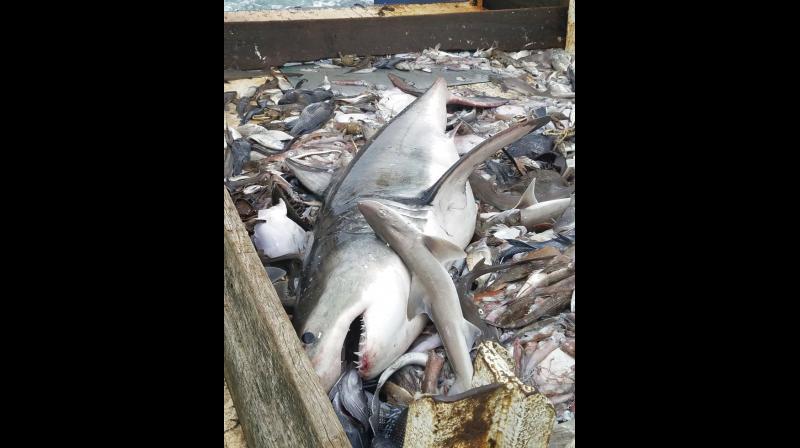 Photo provided by fisherman Michael Lorello shows a great white shark Lorello caught while squid fishing three-quarters of a mile from Misquamicut Beach in Westerly, R.I. Lorello was surprised when he dragged up a net off the coast of Rhode Island. Inside, the 6-foot-long great white shark was showing off its teeth and moving about, very much alive. (Photo: AP)

Boston: No, this is not Sharknado. Great white sharks have had run-ins with New England boats this week. Fisherman Michael Lorello was very surprised when he dragged up a net off the coast of Rhode Island.

Inside, a 6-foot-long great white shark was showing off its teeth and moving about, very much alive.

Lorello had caught the shark Sunday morning while squid fishing three-quarters of a mile from Misquamicut Beach. The fish was on the boat for less than 10 minutes, and then quickly released back into the water.

Lorello's photos and videos of the brief catch on Facebook have had over 1 million views. One of the videos shows the shark thrashing on board the boat as crew members approach it to send it back into the Atlantic. Lorello says he thinks the fish was about 400 to 500 pounds, and has never experienced anything like this in his two decades as a fisherman.

"I've been fishing for 20 years," Lorello said, "but I've never heard of something like this." He said the shark "flopped around" as crew members figured out how to release it. They used a crane attached to the boat to lift the shark back into the water, as a man yelled "plenty of life in him," narrating one of several Facebook videos.

He did say great white shark populations are higher in Massachusetts, where there is a large population of seals.

Up in Massachusetts, a second shark was not so lucky on Saturday. The Atlantic White Shark Conservancy posted photos on its Facebook page of a dead 9-foot, 657-pound great white shark caught in a gill net off the coast of Scituate on Saturday, saying it had been caught "unintentionally."

Photos of that shark caused an uproar on social media, with some readers finding a photo of a young girl petting the upside down shark as offensive and leaving comments like, "This is not a toy!"

The conservancy commented on its page, "The photos from our post are just after the shark was picked up from the boat to be moved to the ground for scientists to collect samples. Much will be learned from this animal."

John Chisholm, a shark biologist with Massachusetts' Division of Marine Fisheries, told The Patriot Ledger remains of a striper and part of a seal were in the stomach of the shark, an immature 10-foot female great white.

Great white shark sightings are remarkably common off the New England coast. Sixteen sharks were spotted off the coast of Cape Cod in just one week earlier this summer.