A recent survey says employees have confessed to having had at least one dalliance with a co-worker. 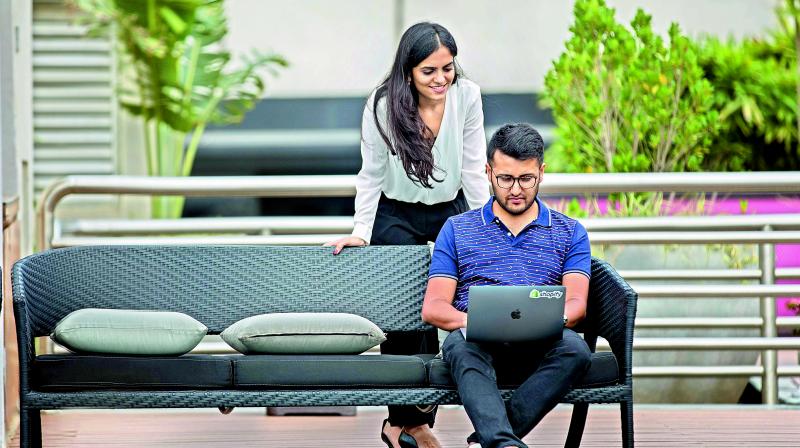 Love is in the air. In workplaces too, says a new survey by the Society for Human Resources Management in the US.

After the #MeToo movement sent shock waves across the world, several firms came up with strict workplace-relationship rules. However, according to the survey, of the 696 workers who were surveyed, around one quarter confessed to indulging in at least one dalliance with a co-worker.  In the sophisticated era we now live in, the question is, do we need strict rules governing romantic relationships in offices, or should things be more flexible, as managements can’t really stop people from falling in love or dating each other?

We delve deeper to find out.

Kumar Keshaw, a senior Human Resource specialist in a leading MNC, tries to explain the rationale behind the strict rules. He says, “Romance at the workplace is nothing new. But most organisations consider it a distraction and cause of loss of productivity. It is essential for millennial human resource professionals as well as organisations to understand basic human nature. In my opinion, scrutinising romance at the workplace could lead to loss of productivity and concentration, instead of achieving positive results. However, it is also important that employees disclose their relationships as well as break-ups (they happen a lot in the current era) to human resource personnel, so that HR can view the relationship status in the light of POSH (Prevention of Sexual Harassment) laws.”

Stressing that HR professionals should also ensure that romantic relationships in the workplace don’t give scope for bias in decision-making, Keshaw says “Maybe putting the two persons involved in different teams might work. What I personally feel is, in this competitive world, where everyone is trying to prove themselves, emotional support is required. A manager might not be able to provide that.” A romantic involvement can also be a strategy for controlling attrition, he adds.

Office romances are undoubtedly products of the fast-paced lifestyle we live in. Those shivers of excitement you get when your crush passes by are what bring the light into the lives of most professionals. Amrita Fernandes found the man of her dreams at her workplace. After 26 years of a successful marriage, she believes that the workplace can be the best place to find your soulmate. She says, “Falling in love is a very natural phenomenon, and to find love in your workplace is just a blessing. Rules must be flexible for the current generation, which is so focused on a successful career that their personal life has to take a back seat. So, I believe that falling in love with your colleague is absolutely fine and healthy, as long as there’s no conflict of interest and office decorum is maintained.”

But if you find that it’s your boss who makes you go weak at the knees, the stars might not favour you. However, there are some exceptions that prove the rule here too! Priya (name changed on request) fell in love with her boss and is now married to him! They made it work, but it wasn’t easy. She shares, “When my colleagues found out that my boss and I were in a committed relationship, my office life went for a toss. All my accomplishments were tainted, as people thought my boss was doing me favours. I was perceived to be receiving special treatment. The worst part was, my peers resented me and stopped socialising with me. It was hard and I had to quit eventually. Only after that could my husband and I focus better on our relationship.”

Priya’s husband adds, “My boss constantly advised me to stop the relationship. I stood up for us and ensured that my work and personal life were kept separate, and I never let one influence the other. However, it was challenging for me to be hard on Priya when she messed up at work.”

Dating or marrying a subordinate comes with its own challenges too. “After spending your whole day together, there won’t be much to share when you get back home. There are occasions when we lack the interest to discuss how our days transpired,” says Vaibhav Bhasin, a senior analyst at a reputed healthcare firm in Delhi, who is married to his colleague.

But there’s an upside as well, of course. Vaibhav says, “In my opinion there are several advantages. We can strengthen our bond and build the trust we need in the relationship. A happy home always results in a happy and efficient employee. It can also turn out cost-efficient as we travel to the same location.”

In the end, love conquers all, even the workplace!