It’s a snare that traps even the intelligent and educated 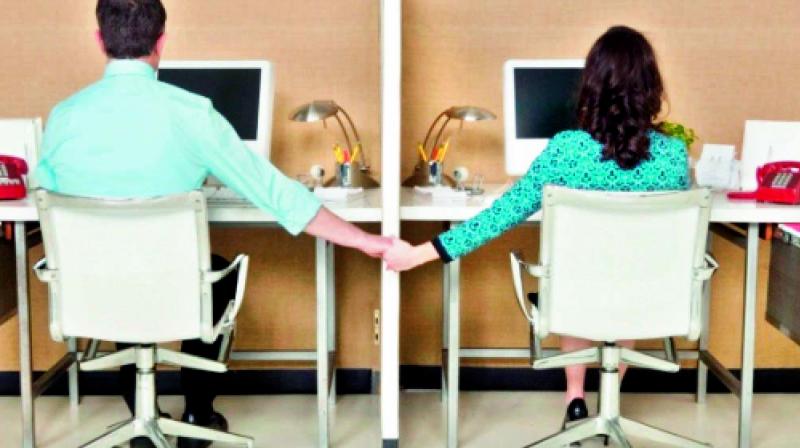 In today’s world, pressures of work often leave a person with little time for a social life. Representational Image

The word ‘crush’ is an outmoded one today. It was once used to refer to a silent, mostly immature, and often misguided romantic interest in someone within the sphere of one’s life.

Usually an adolescent rite of passage, it sometimes extends beyond the teenage years. The more common situation today is ‘infatuation’, which, unlike a simple ‘crush’, isn’t always one-sided, and when it happens in the workplace, can have disastrous consequences.

Many of us will be familiar with this intense, all-consuming, though short-lived involvement, which, when it wears off (as it inevitable does) leaves us wondering at the blinkers that must have been in place for us to have felt attracted to that particular person.

I myself remember the times when I rued the experienced, and asked a confidante, “What could have I seen in him?” only to get the prompt come-back – ‘That’s what we all wondered!’, making me feeling foolish and awkward at having been the subject of workplace gossip.

But the workplace, where we spend long hours in close proximity with a variety of people, is indeed fertile ground for such unreasonable attachments to develop.

In today’s world, pressures of work often leave a person with little time for a social life.

As a single working girl laments, “It’s work-home-TV dinners-sleep, and a new day brings a round of the same grind. Sundays are shampoo days, and the one chance to attend to chores such as laundry, ironing and cleaning out the cupboards and kitchen. It’s an endless round.”

Even if one has a family, the demands on time are similar.

So the urge to start a dalliance at work is quite natural, especially for those not cut out for long-term relationships.

The enforced proximity sets up attractions that run counter to true tastes.

It could begin with a harmless wish to win favour with a senior person, who finds the adulation of a person lower in the pecking order, or less advantaged, a turn-on, and both parties proceed to overlook such obvious hurdles as marital status, age incompatibility and other aspects which make the relationship inadvisable.

Or it could be a mutual attraction between colleagues at the same level, who bond over shared lunch or a few snatched moments of relaxation in the midst of work.

One young man who fell prey to such an infatuation let his fiancé go, choosing the workplace relationship over her, and to this day regrets the step.

He has to contend with loneliness and is still trying to fit into a new workplace.

Unfortunately, as human beings, we have the tendency to repeat mistakes. A friend relates the story of a young college professor, who went into a relationship with an incredibly unsuitable colleague, a married man with two children, who strung her along while remaining firmly entrenched in his marriage.

Later, she sought solace in a similar entanglement, which also ended in disillusionment. Set in a destructive cycle, she resigned herself to her ‘fate’, and entered upon yet another such relationship.

Education and intelligence are apparently no shield against loneliness, and the tendency to clutch any straw that comes one’s way.

The breaking down of family ties, distancing from parental guidance and increased reliance on one’s own less-than-perfect judgement are features of modern life.

Recognising the need for direction, guidance and advice, life-coaching programmes are mushrooming and psychiatrists and counsellors have thriving practices.

In schools and colleges like in my university in the US, counselling
sessions where trained professionals help immature minds to avoid the
pitfalls of heartbreak, breakdowns and worse, are mandatory.

If only people pay heed to the dangers inherent in workplace infatuations...But that is a big ‘if’.