The reflection in the window behind exposed how the man was recording the woman in his smartphone. 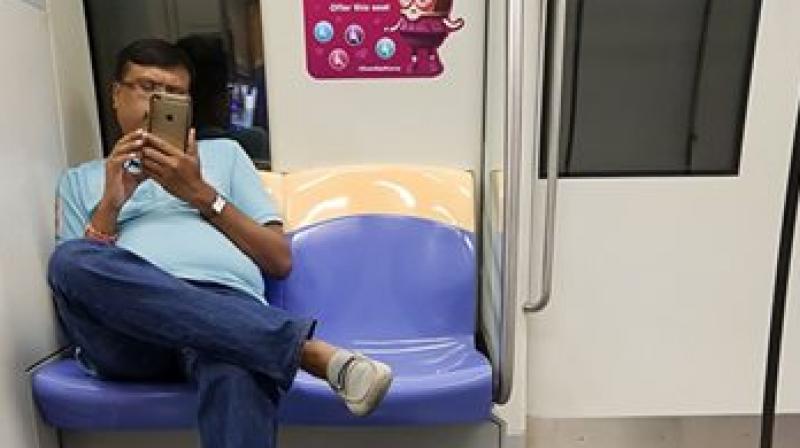 He had many more obscene videos of unsuspecting women on his phone (Photo: Facebook)

Singapore: Crimes against women including eve teasing and harassment in public places as well as the workplace are rampant. Even as society grapples with misogyny that fuels this attitude towards women with strict action against offenders, it seems to have little effect since women continue to face violation of their space in one of form or other.

While women in India’s public transport system always have to look over their shoulder for lecherous gazes and the occasional unsolicited graze of hands, a woman in Singapore was shocked at the violation of her privacy while travelling on a metro. She shared a video where she caught a man red handed while he recorded a clip of her on his phone.

Although the man seems to think no one knows what he is doing, the reflection of his phone screen on the window behind him clearly shows him recording a video of the woman seated opposite him. The woman Uma Mageshwari confronted the man who was caught off guard and tried to cover up by saying that Uma is like his sister.

Not convinced by the inane excuse for the blatant violation of her private space, Uma reported the man called Suraj to the MRT staff who immediately acted against him. She also wrote in her Facebook post that the man was in possession of other videos which showed unsuspecting victims in obscene circumstances.

The perverted actions of this creep is one of many difficulties women face on public transport, voyeurism being the latest apart from sexist comments and molestation.