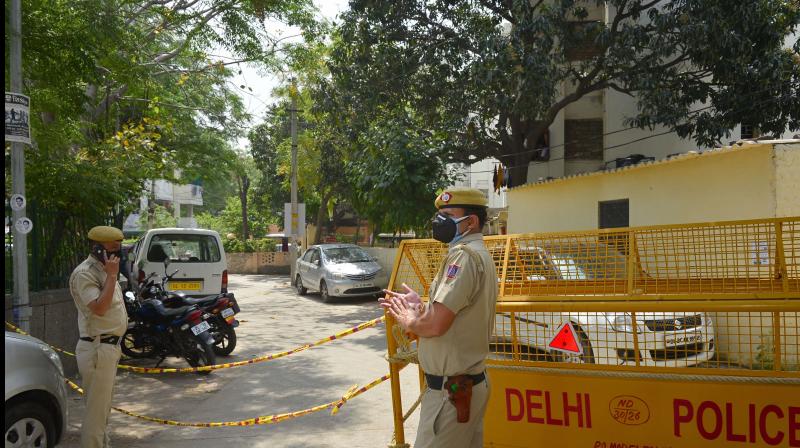 Police personnel stand guard at Model Town police colony, identified as a COVID-19 hotspot, during the nationwide lockdown to curb the spread of coronavirus, in New Delhi. PTI Photo

Hyderabad: As a young Major from 8 Gorkha Rifles of the Indian Army, Col. SK Sinha (retd), then posted in Sri Lanka, was part of a battalion that killed a top LTTE leader in Jaffna in December 1988. Skirmishes between the Indian Peace Keeping Force (IPKF) and LTTE was an everyday affair. The IPKF personnel had to sustain on basic ration and limited water.

“Despite lack of food, water, sleep and everyday hardships, our morale was high. The present lockdown is nothing compared to those hardships. We have enough food, water, shelter and rest. There is nothing to complain about,” Col Sinha (retd) says.

For 285 odd families residing at Patel’s Green Park apartments in Yapral, adjoining the Cantonment, recounting real-life experiences by retired officers of the Indian Army, Navy and Air Force is keeping the josh high among all residents during this crisis.

In this residential society, where quite a few serving and retired officials from Indian tri-services reside, along with civilians, the faujis have taken it upon themselves to not only motivate residents, but also to take measures to ensure safety of all residents, putting to use skills acquired during operations in war zones.

“When I recount such incidents, my civilian friends feel motivated to go through lockdown cheerfully,” says Col. Sinha (retd), ex-Black Cat commando. He has plenty of stories to share from his experiences in Sri Lanka, north-east and Jammu and Kashmir, where he participated in several operations.

“While chasing terrorists in north-east, we would get stuck in jungles for several days with hardly any food, drinking water or a view beyond 20 metres. This lockdown is a minor aberration in a comfortable, safe environment,” Col. Jayant Rao (retd) shares with residents on the community WhatsApp group. Several years of disciplined life has made them excellent leaders in time of calamities, he says.

Another officer, Col. Rao (retd) tells residents how when he was posted in eastern sector along the Indo-China border, at a height of 15,000 feet, with minimum infrastructure, with heavy snowfall.

“We were cut off and went without supplies for almost two weeks. We were fighting the enemy right in front of us, hostile weather and limited resources. Such experiences leave us with an attitude to to face any challenge in life,” he said.

The faujis are taking special care of elderly people, including ageing retired officials. A group of five families have adopted elderly couples, and share three meals a day with them. This ensured that once cooks and maids left due to the lockdown, they would not have to suffer.

“Due to high blood pressure, tremors of hands and blood sugar, I was unable to do any household chores. Without maids or any help, I got depressed, and had even become suicidal. Now, these five families have adopted me and provide me food in turns. They pack food in disposable containers so I don’t have to wash,” revealed 70-year-old Wing Commander Unni Kartha (retd), who lives alone.

Col. A. Narsimham (retd), society president, said they have formed into ‘volunteer officers’, who ensure all elderly resident are provided help at doorstep, including services of doctors, and other daily essentials. They coordinated with GHMC and got all staircases, lifts and premises sanitised. Two of three entry/exit gates have been shut.