Sex in the 30s summed up with witty tweets

The tweets have a hilarious take on how action in bed is very different from the impulsive 30s. 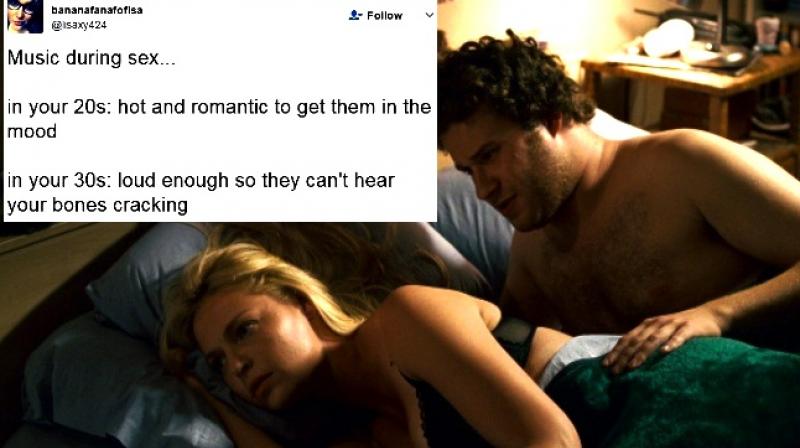 People may age but sex always remains an important aspect of their lifestyle which just keeps undergoing changes as they enter different decades of life. In the aftermath of the exciting 20s when hormones are at their peak, the 30s are a completely different place to be in with experience helping improve while things tend to get awkward.

Young people have been increasingly talking about sex, be it their desires, fantasies, satisfaction in bed and even the weirdest experiences in their sex lives. With the rise of social media platforms, people have taken to Twitter for sharing experiences that shed light on sex in the 30s.

While people are particularly elated about sex in early stages, the energy levels just dip with age.

Experience does make action between the sheets better, but then it also raises the bar.

Listen, I'm 30. It would behoove you to not walk in my bedroom thinking you're gonna be the best I ever had the first time we have sex.

Going wild with booze and sex all night is clearly something that should be left for the good old 20s.

Sex In Your 30s #Haiku
We can open this
2nd bottle or wine, or
have sex—but not both.

Growing up also has its effects when it comes to talking dirty in the bedroom.

"Oooo baby, whatcha got under them khakis" -sex in your 30s

And those simple yet special things that are an inseparable part of what sex really is like.

Like most things in your thirties, the only thing that's different about sex is the amount of toilet breaks.

Leaving the 20s behind, you finally make peace with your body image with age and experience.

You have matured, hence the choice of music is also a lot more calculated in your 30s.

in your 20s: hot and romantic to get them in the mood

in your 30s: loud enough so they can't hear your bones cracking

This tweet seems to accurately describe a steamy night in your 30s.

It may just seem like a fetish in the 20s, but now we know the secret behind it.

Make some sex tapes in your twenties so you can watch them and remember what sex was actually like when you're married and in your thirties.

The 20s are adventurous, but the 30s are all about exploring with the number of partners in bed, or perhaps introspecting.

Sex in my 30s has been varied. No threesomes, a couple of twosomes........ lots of onesomes

It’s the time of your life when you realise that being sexy and having great sex at the same time is one tight rope to walk.

Being in your 30s means you can exercise really hard to be sexy or take a nap and actually have the energy for sex.

So everyone on the threshold to enter their 30s need not worry, these pearls of wisdom will certainly guide them through troubled waters.