Cadbury’s ad campaign that promotes local vendors by capturing over 1,800 local businesses in India, has won many hearts 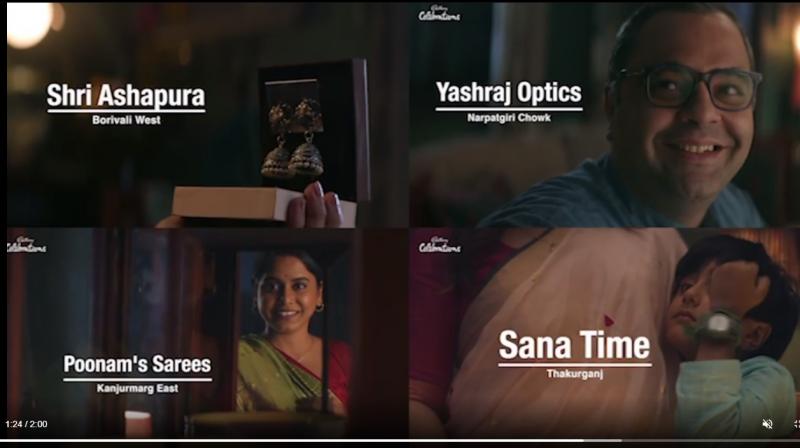 A still from the advertisement featuring gifts bought from local stores

Supporting the survival of small businesses in India has been a matter of concern for all concerned. Especially through the pandemic crisis, things have gone awry for many small businesses in the country, painting even festivities in gloom. Amidst such despair, one company’s ad campaign has caught the attention of the netizens across social media platforms, and is being applauded for its spirit of generosity and thoughtfulness amidst tough times.
With the objective of helping small businesses in various cities of India to reach local consumers, Cadbury had come up with an ad backed with technology and made for local businesses, as an initiative to coincide with the auspicious Festival of Lights, Diwali.
Anand Mahindra, well-known billionaire businessman and chairman of the business conglomerate Mahindra Group, took to his Twitter account recently to share the ad. “I have been saying that post-lockdown, we all have to pitch in & support small businesses & the self-employed in our communities if they are to survive. Kudos to you, Team Cadbury for harnessing Technology to do just that... (sic),” the entrepreneur wrote in his tweet.

Not an ad but an initiative

Created by Cadbury Celebrations, Ogilvy and Wavemaker, the ad film is set against the backdrop of an Indian family celebrating Diwali. It shows the woman of the house gifting her kids and husband something bought from a local store. The advertisement ends with a note on how we all need to support small businesses so it’s a happy Diwali for everyone.
The ad has been streaming across all the social media platforms. The hyper-personalised, local-data-driven campaign has data of over 1,800 local businesses across the country using artificial intelligence (AI) and technology to reach out to local retailers across 260 pin-codes to promote their business.
The ad showcases local stores around a specific pin-code against the product category across cities such as Mumbai, Delhi, Indore, Pune, Ahmedabad and Lucknow, prompting the viewer to buy from a local store in these cities. Based on the location from which one views the ad, small stores displayed in the ad change. The campaign has used algorithms that serve the ad tailored to the viewers based on their geo-location in hundreds of custom-designed versions of the same ad with location-targeting pin-codes.
Anil Viswanathan, senior director, marketing (chocolates), insights and analytics, Mondelez India, talks about the intention behind the campaign. “This year warrants for acts that signify new beginnings and the potential of goodness in an imperfect world, and our recent Cadbury Celebrations campaign infuses this thought at the back of evoking generosity. Banking on the proposition of ‘Iss Diwali Aap #KiseKhushKarenge’ (‘This Diwali, whom will you make happy’), we are putting our best foot forward to inspire people to do what’s right this time by acknowledging people who helped us in difficult times,” states Anil Viswanathan.

This ad also signals a fast-adapting industry for not only using technology to reach a maximum number of viewers but also weave it into storytelling, making it more than just a seller–consumer transaction.
Mayank Jain, a social-media marketing strategist, hails the brand for its initiative and the ad for capturing Indian audiences’ emotions. “Indian consumers are emotional and if an ad captures that emotional quotient, it’s successful. On that measure, the ad is good, with good intentions of capturing local vendors. Clearly, the makers are trying to capture a perspective from the other side of the table,” Jain states.
While Jain believes the ad will inspire future ad and marketing specialists to think beyond limitation while using technology to reach maximum number of people, Marketing Professor Bhavya Soni calls the Cadbury ad a diagonal cross-branding strategy.
“This is a beautiful marketing communication experiment,” says Prof Soni. “Companies use cross-branding to create synergistic effects while communicating with their target markets. Usually, companies collaborate for complimentary products at the horizontal or vertical level. This is a typical example of diagonal cross branding where a global brand is promoting local small vendors in India.”
For the last few months since COVID-19 hit the country, brands — in their attempt to resonate with their customers — have been communicating about safety measures against the virus. However, with the unlock phase seemingly lightening the situation, they have begun to talk more about resilience, strength and togetherness to overcome the situation.
And while marketing communicators are typically known to try every trick in the book to grab eyeballs and touch the emotional chords of their customers, Cadbury’s latest marketing communication has set an example of thinking globally while acting hyper-locally.