An exhibition that captures the unexplored landscapes of the Spiti valley through black and white photography. 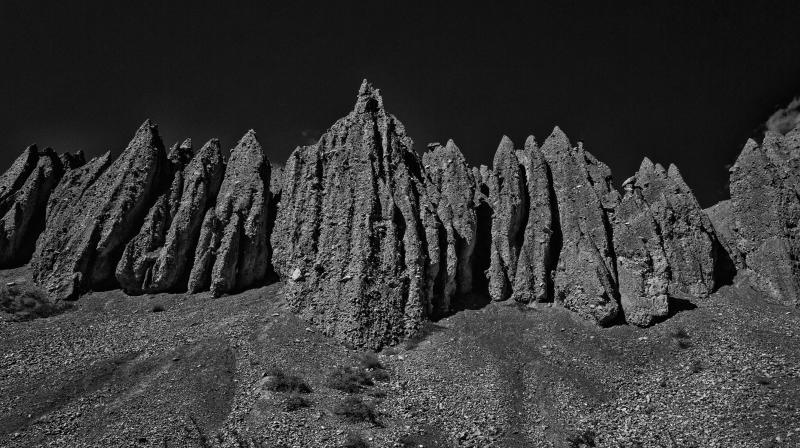 When it comes to India and the beauties it possesses such as Ladakh and Kaniyakunari, there are still some that are not even talked about, as they are often the roads not taken. The Spiti Valley is one such gem because of the highlands it possesses but it is less traveled because of the road conditions.

Photographer Amit Verma exhibits his photographs under the banner of 'Light and Lines in the Middle Land' at the India Habitat Centre where he showcases the beauty of the valley using the monochrome form of photography. On the name of the series Amit explains, “You will see the drama of light in the landscapes. The drama which the light is throwing where I was, plus the lines and the contours of the landscape because I have captured in such a way that if there was a river, the river also looks like a line reflecting the light.”

The journey to the valley for him was ‘quite exciting’. “Spiti is very close to my heart because there is something different about it, it is where I first started my journey with monochrome photography,” he says. He points out that there are a lot of people who compare Spiti with Ladakh. But the valley for him is a notch higher. He explains, “The kind of landscape you see in Spiti is pretty raw and rustic. For monochrome, you need a lot of greys and contrast. So when you go higher in altitude, it is more beautiful and less pollution at that height. You get ample contrast and tone.”

Amit expresses that it was in 2011/12 when monochrome (black and white) photography came to him, and it was when his mentor Rakesh Sahai, introduced him to the photographs of Sebastião Salgado and since then, there has been no looking back.

When it comes to the perspective of fine art, he believes that monochrome photography forces the viewer to imagine where the landscapes are.

The exhibition on till January 12