Kumbh at its best 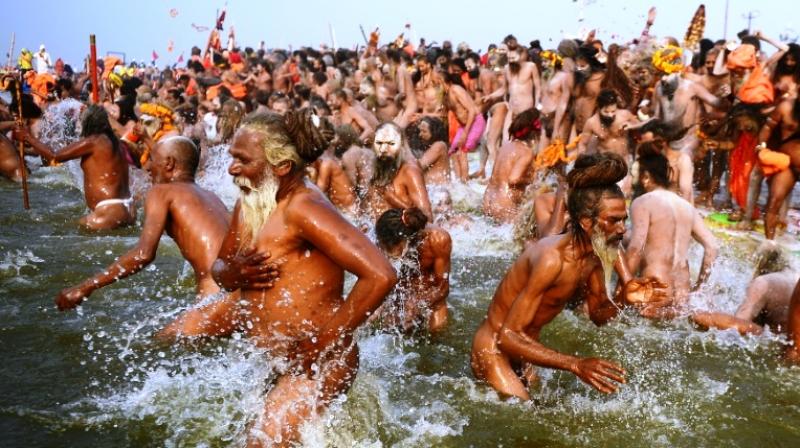 More than 30 million devotees were expected to immerse themselves at the confluence of three holy rivers – the Ganges, the Yamuna and the mythical Saraswati. (Photo: AFP)

Allahabad: Millions of Hindu pilgrims took the plunge into sacred rivers at the world's largest religious gathering on Monday, led by ash-smeared holy men and accompanied by religious chanting. Hindus believe that bathing at the confluence of the sacred rivers cleanses them of sin and Monday's Mauni Amavasya Snan, the "no moon day", is considered the holiest of the gigantic 48-day festival that runs until March 4.

On the most auspicious day of the months-long Kumbh Mela festival, devotees rose at dawn in the northern city of Allahabad to immerse themselves at the confluence of three sacred rivers – the Ganges, the Yamuna and the mythical Saraswati. Thousands of Naga Sadhus, a devout, fierce and famously nude sect of followers of the Hindu god Shiv, and other holy men clad in saffron robes, led the mass bathing in the chilly waters, some brandishing swords and tridents.

More than 30,000 police were on duty to manage the huge crowds and prevent the deadly stampedes that have marred such previous gatherings. Organising authorities spent millions on an operation to block drains and make sure that waste water pouring into the rivers does not threaten the pilgrims.

Special skimmer boats collected waste from the surface of the rivers and more than 40,000 temporary toilets have been installed. Pilgrims have been streaming into a temporary tent city, three times the size of Manhattan island, in buses, trains and cars to participate in the festival's high point. Nearly 12 million people attended the inaugural bathing ritual on January 15 and about 120 million are expected during the whole festival.