A suicidal red bus-driver zips past at break neck speed and she sips some more of her water. 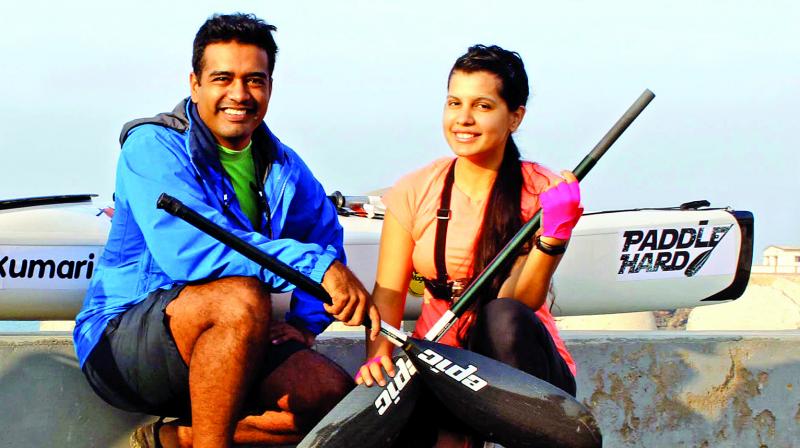 To be reunited eight to nine hours later at another beach.

Maharashtra is a funny state. For one, it is my home. Two, the road that runs along its 720 km coastline is hilly and broken. Three, the coastline does not know what winter is. Why does it affect me when I’m kayaking 5 km out at sea? Because when I started this 3,000 km solo kayaking expedition from Kutch to Kanyakumari by sea, I was being mirrored on land by my partner, Shanjali Shahi, cycling the whole way.

Every morning, we ready our vessels. I, my Epic-18x kayak and she, her Schwinn Searcher cycle. Food, water, emergency kit, phones kept at the ready. We’d carry, walk, drag ourselves and our vessels to where we landed the night before, and bid each other goodbye, excited about the unknown ahead of either of us. To be reunited eight to nine hours later at another beach. Another day done, another handful of kms ticked off.

As a solo female cyclist trudging the empty expanse of coastal India, Shanjali makes it look effortlessly easy, almost always reaching our destination a couple of hours ahead of a kayak, taking a pounding at sea. At times, I hear a jibe about me having to paddle harder, or a joke about her spending time with real people while I was talking to fish. That ended when we reached the home state!

It’s day 33. And Shanjali is at Murud. The night has not been kind to her and the limited sleep makes her hide a sniffle as I launch at noon. It’s late and we have much to cover. We must hit Harihareshwar, at 55 kms, if we are to save a day. As she sees me sail off, she kicks her cycle into gear. She cycles the short distance from the beach to Rajpuri jetty for the ferry, the only way south. As she waits for it, a handful of schoolchildren emerge from a bus taking the same boat. She engages them about the importance of seeing the world on your own terms, while the teacher and bus conductor take turns on her 21 geared wonder.

The boat ride is short, but leaves everyone exposed to the elements. Dighi port, on the other side, with its poor roads and barren landscape lets the sun cut in deep while keeping the pace minimal. It doesn’t help that the lunch she packed for the day has gone bad in the sun.

The flat road gives way to the ghats(hills) as the road travels inland. For the casual observer, it is an odd sight. A girl dressed from head to toe, donning a full jacket to beat the sun, scarf pulled up to the nose, sun glasses and a cap, standing high off her seat, pushing the pedal in the brutal afternoon heat. But Shanjali doesn’t complain. And she doesn’t stop. Past Diveagar and its pristine beach littered with red rock temples, Shanjali dips into her water reserve. The flat, windy roads of Gujarat are dotted with trees in the same way that this route is dotted with bare rock. Shade is hard to come by.

Three hot and humid hours later her speed is a mere 10–12 km/hr. If the uphill climb is hard work, the descent is plagued with gravel and potholes, deadly for her thin tires. Often riding gives way to walking and empty roads give way to emptier roads.

A suicidal red bus-driver zips past at break neck speed and she sips some more of her water.

By 4:00 she’s struggling and has only reached Shrivardhan, the temple town. On any other day, the left over 19 km would be a mere hour’s ride, but here in the ghats, with trucks plying on single lane roads it is slow going. Her sniffle is now a full blown cold and impedes her breathing. She checks her phone for my location and sees I’m on course. She grits her teeth and sits back up on her seat. Pushing the cycle into the lowest gear, she rides out the hills for the next agonising hour and a half. Hot, aching, breathless, hungry and ill.

On the water, I get a call. A crimson sun is setting behind me as I wade into the calm waters. And I spot her sitting by her cycle in the sand. Triumphant and defeated. Glorious and destroyed. And I feel lucky to be her companion.