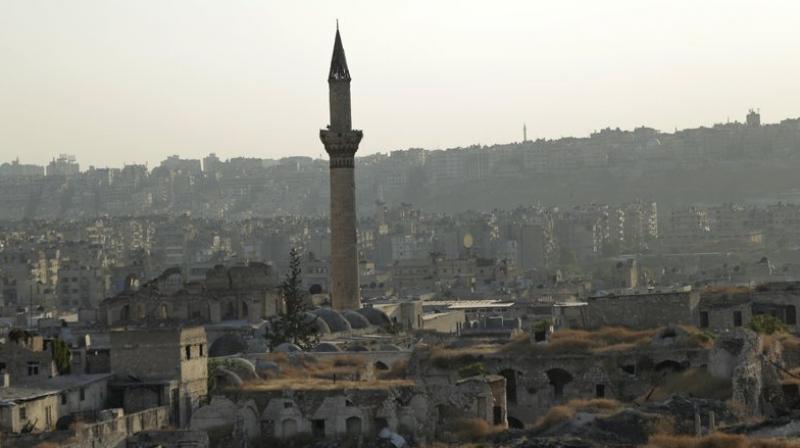 In the copper market, Ahmad Zuhdi Ghazoul used his hammer to gently tap an embossed decoration into a copper piece. (Photo: AP)

Aleppo: Bit by bit, Aleppo’s centuries-old bazaar is being rebuilt as Syrians try to restore one of their historical crown jewels, devastated during years of brutal fighting for control of the city.

The historic Old City at the center of Aleppo saw some of the worst battles of Syria’s eight-year civil war. Government forces finally wrested it away from rebel control in December 2016 in a devastating siege that left the eastern half of Aleppo and much of the Old City — a UNESCO world heritage site — in ruins.

The bazaar, a network of covered markets, or souks, dating as far back as the 1300s and running through the Old City, was severely damaged, nearly a third of it completely destroyed. Most of it remains that way: blasted domes, mangled metal and shops without walls or roofs.

But planners are hoping that by rebuilding segments of the bazaar and getting some shops back open, eventually they re-inject life into the markets. Before the war, the historic location drew in Syrians and tourists, shopping for food, spices, cloth, soap made from olive oil and other handicrafts.

The latest to be renovated is al-Saqatiyah Market, a cobblestone alley covered with arches and domes dotted with openings to let in shafts of sunlight. Along it are 53 shops, mostly butchers and shops selling nuts and dried goods. This souk had seen relatively less damage, and the $400,000 renovation took around eight months, with funding from the Aga Khan Foundation.

One butcher, Saleh Abu Dan, has been closed up since rebels took over the Old City in the summer of 2012. Now he’s getting ready to open again in the next few weeks. He said he’s happy with the renovation, which added a solar power electrical system, though he still needs to spend about $2,000 to fix his refrigerator and buy a new grill and meat grinder.

“I inherited this shop from my grandfather and father and I hope that my grandchildren will work here,” he said.

The market’s official inauguration is scheduled for later this month. But rebuilding is one step — bringing life back is another. Al-Saqatiyah is the third souk to be rebuilt in Aleppo, after the Khan al-Gumruk and the copper market.

A year after their reopening, both those souks still struggle to attract customers. Most days they are largely empty.

“I open for few hours a day but rarely sell anything,” mourned the owner of a cloth shop in Khan al-Gumruk.

Many of the customers who used to throng the markets before the war have either left the country or got used to shopping in other parts of the city since business stopped in old Aleppo after rebels stormed eastern and central neighborhoods seven years ago, and tourism is non-existent. Getting into the opened markets in the souk today is still difficult as many of the alleys are closed and deserted.

Aleppo, Syria’s largest city, was the country’s main commercial center before the war. Reconstruction of its devastated eastern sector has hardly begun.

Basel al-Dhaher, the architect who led renovation of al-Saqatiyah market, said it will take tens of millions of dollars to rebuild the entire bazaar. Western sanctions that block money transfers to and from Syria are delaying work, he said.

He said al-Saqatiyah was chosen for renovation because the work could be finished quickly and inspire others to rebuild in other parts of the bazaar.

Some shopkeepers are hopeful that strategy can work. In the copper market, Ahmad Zuhdi Ghazoul used his hammer to gently tap an embossed decoration into a copper piece. Across the alley, workers were fixing the ceilings in two other shops.

“Thank God they are all coming back to renovate,” said Ghazoul, who has been a copper worker for three decades. “Business will be stronger than before.”