Military aircraft, including MI 17, have conducted six sorties to transport rescued people from the site 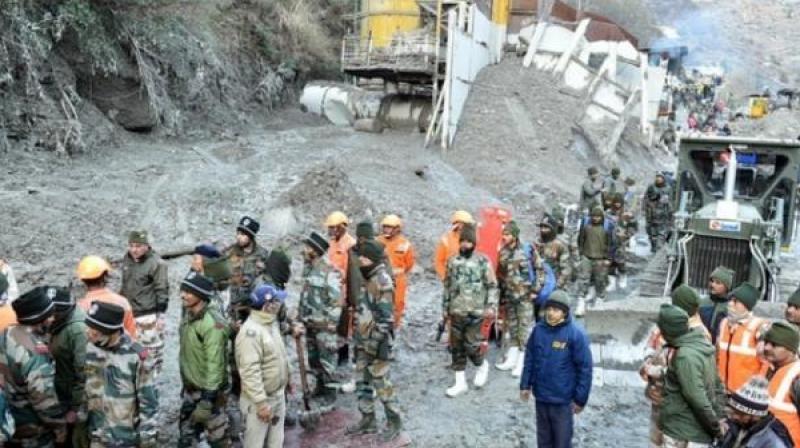 New Delhi: Twenty-six bodies have been recovered so far while 171 people remain missing in Uttarakhand where an avalanche triggered glacier burst, causing massive devastation in the Chamoli and neighbouring regions. The glacier burst on Sunday led to flooding and the heavy flow of water and silt damaged five dams in the downstream areas. Major rescue operations by multiple agencies are underway in the state, particularly in the two tunnels in Tapovan where, according to Uttarakhand DGP Ashok Kumar, 32 persons are trapped in one tunnel and 121 in another are missing.

“A joint team of NDRF, SDRF and Army is conducting a rescue operation. The team has reached the 130-metre mark in Tapovan tunnel, it may take two-three hours to reach the T-point. Efforts are underway to safely rescue those who are stuck in the tunnel,” Uttarakhand chief minister Trivendra Singh Rawat said on Monday evening. Thirty-two workers belonging to Uttar Pradesh's Lakhimpur Kheri are stuck in Tapovan.

Military aircraft, including MI 17, have conducted six sorties to transport rescued people from the site. Six scientists visited the site for preliminary observation on the disaster.

Mr Rawat quoted scientists to say that the areas where avalanches struck on Sunday was not prone to such activities and the calamity might have been caused by an "abrupt sliding down" of millions of tonnes of snow from a hill, rather than due to a glacier burst.

Prime Minister Narendra Modi on Monday asserted that his government is taking all measures to support the people of Uttarakhand. He also assured a delegation of state MPs that the Central government is working to further strengthen infrastructure there to deal with any natural disaster in future. Union home minister Amit Shah and BJP president J.P. Nadda were also present at the meeting.

Mr Modi said several institutions of the Central government are part of the rescue mission and state bodies are also working effectively. Noting that the Himalayan state is vulnerable to natural disasters, Mr Modi asserted that the government is working to further boost the state's infrastructure to deal with such a crisis.

The Uttarakhand glacier burst has caused an estimated loss of Rs 1,500 crore at the NTPC's 480 mw Tapovan-Vishnugad hydel project and has put a question mark on its scheduled commissioning in 2023, Union power minister R.K. Singh said after visiting the site.

"The project was scheduled to be commissioned in 2023. But there is a question mark now on how long it will take to desilt it as lakhs of tonnes of silt is lying at the project site," Mr Singh said.