Nomad tales: Time and tide wait for none

It isn’t easy ducking and rounding a myriad of ships, the afternoon sun coming down hard. 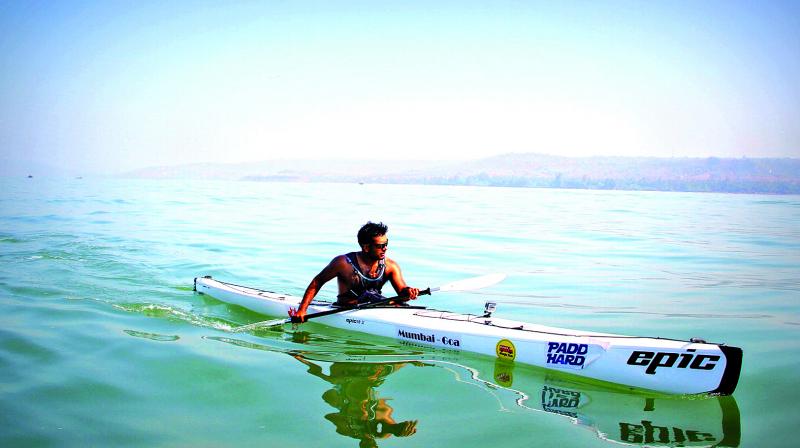 The bemused crewmen on the ship throw down a greasy line to hold onto, but with the waves crashing off the ship’s side it’s easier to be by myself.

Touchdown. Feet in the brown water and I dash to pull my kayak ashore. I turn to wave at the white inflatable kayak ferrying my girlfriend & my kayaking partner as two kids run down the slopes of Elephanta Island. Casting off from the Gateway of India at 7.30, we felt brave enough to cut past the Navy docks, shiny grey destroyers & patrol boats. A better Sunday could not be asked for? I was wrong.

The tide that helped us get here, refuses to let us leave. A barge 2 km out takes me an hour to get to. We head for a ship 3 km out. It takes me an hour-and-a-half, but I lose Shanjali & Manu. The bemused crewmen on the ship throw down a greasy line to hold onto, but with the waves crashing off the ship’s side it’s easier to be by myself. For 30 minutes I bob up & down till the inflatable comes into sight. When they catch up, between an energy bar, I insist on staying together for the next 8 km. The tide changes, ready to take us back.

Coming out of the ship’s shadow, we hit the channel and it is roaring! When it can’t get any worse, my rudder jams and the back of my kayak starts getting heavy — as if it’s taking on water. Without the ability to turn or accelerate, all I can do is paddle straight. I can spot Manu and Shanjali being lifted with every wave and we are again drifting apart.

It isn’t easy ducking and rounding a myriad of ships, the afternoon sun coming down hard. At 4 pm, and 5.5 hours of kayaking later, Gateway of India finally comes into sight. A half hour later, I’ve broken through, landed and I haul the kayak up. As I had guessed, I empty out buckets of sea water from the kayak and pull a plastic straw from my rudder.

But the day isn’t done. On a call, Manu tells me they can see Gateway, but can’t beat the tide. I run up the jetty and find a friend with a powerful motorboat and we set off fishing for kayaks. Amidst the quickly setting sun and wavy conditions, it takes us a while. Finally at 6 pm, 11 hours after we first started, we pull my beleaguered companions out of the kayak to sobering laughter and safety.