Makar Sankranti is the festival of kites. 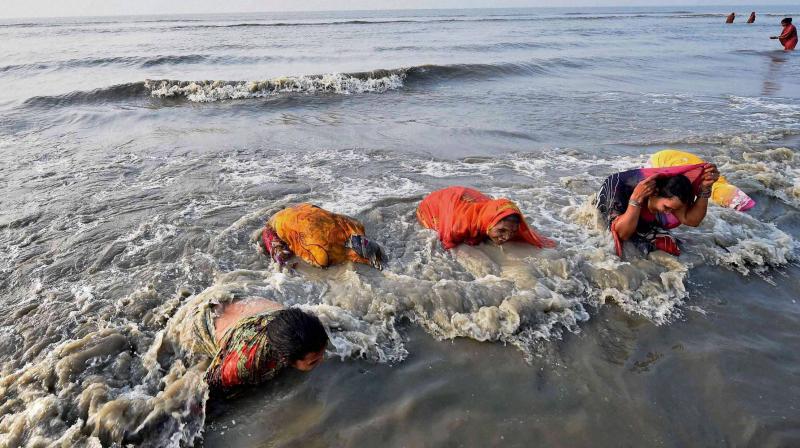 Sagar Island: Devotees take holy dip at the sea shore of Gangasagar Island on Friday. Sadhus and devotees have gathered at Gangasagar for 'holy dip' on the occasion of Makar Sankranti festival. (Photo: PTI)

Sagar Island: Nearly 20 lakh devotees from across the country as well as from neighbouring Nepal, Bhutan and Bangladesh on Sunday took a holy dip at the confluence of the River Ganga and the Bay of Bengal on the occasion of Makar Sankranti.

With prayers on their lips, the devotees jostled for space since early hours to take a dip in the holy water at Ganga Sagar, also known as 'Sagardwip'. Every year, on Makar Sankranti day, an ocean of pilgrims gather here to take a dip at the confluence of the River Ganga and the Bay of Bengal and offer prayers in the Kapil Muni Temple.

Banerjee has said recently that the Ganga Sagar Mela is being held for ages and pilgrims throng the place in large number for many years, so it should be given the status of the Kumbh Mela. "Last year, around 15 lakh pilgrims had visited the Ganga Sagar. This year already we have crossed that mark and nearly 20 lakh people are here. We have made all arrangements for them so that they can have a memorable outing here," South 24 Parganas district magistrate Y Ratnakara Rao told PTI.

A thick blanket of security cover has been thrown in at the famous spot. The state government has deployed around 3,000 policemen and also pressed into service seven drones to keep a tab on security for safety of pilgrims. For the first time, the state government has equipped its officials with satellite phones to ensure uninterrupted connectivity during the Mela.

"These satellite phones will ensure that communication is not hampered even if there is an earthquake or a tsunami, among other things," another senior official of the state government told PTI, adding that 16 satellite phones have been given to officers on duty at critical locations.

The state government has come up with an innovative Sagar Sanjog Scheme, for providing real-time information regarding the movement of transport facilities for people and vehicles too. The state government has installed 500 CCTV cameras along the over 100 km route from Babughat in Kolkata to the Sagar Island as part of its security coverage for the grand fair.

The state disaster management department has made arrangements to get live feed from the mela area to help effectively monitor the proceedings there. As a part of security arrangements, the state has also introduced a real-time monitoring system the Tirtha Sathi. "Using the Tirtha Sathi, senior administrative and police officers will be able to watch live footages of all transit and other crucial points, relayed via CCTV cameras, on their mobile phones," Rao said.

Besides, 60 giant LED screens have been placed at different points through which pilgrims would be updated about the timings and tariffs of trains, buses and ferries, tide timings as well as safety precautions. "This information will be provided in three languages -- Bengali, Hindi and English -- to facilitate the largest
number of pilgrims," he said.

Elaborating on the arrangements, Rao said the carrying capacity of barges plying from Lot 8 on the mainland to Kachuberia at the Sagar Island has been doubled this year. Two battalions of the NDRF has been deployed in Ganga Sagar to mitigate any eventuality during the Mela. "This year, a total of 85 personnel of 2 BN NDRF are deployed at three different places. One team is deployed at Lot 8, one deployed at Kachuberia and one at Sagar. Each team is well equipped with inflatable boats, deep diving sets, deep divers and flood rescue equipment," battalion commandant Nishith Upadhyay said in a statement.

NDRF boats and deep divers are patrolling round-the-clock at all three places and keeping a close watch on pilgrims who are passing through and taking holy dip at the Sagar. In addition, the Coast Guard and the marine police and several security personnel have been deployed in the Sagar Island to manage the security of the several hundred thousands of pilgrims.