At 44 years old, Vinod Rawat is a differently-abled biker who is scaling the country on his motorcycle. 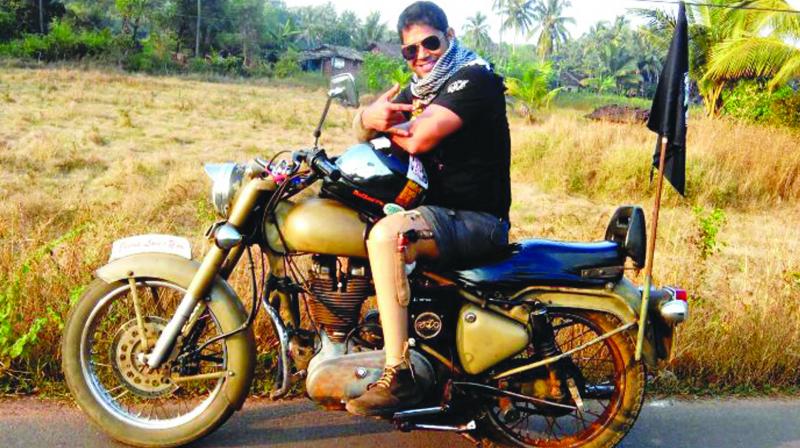 Vinod Rawat is a nationally acclaimed Royal Enfield rider, who has cycled, swam, and ran his way around some of the most difficult routes in the country.

To scale a mountain on a motorbike is an inspirational story by itself — but to scale several mountain trails on a bike as a differently-abled biker is one for the books. Vinod Rawat is a nationally acclaimed Royal Enfield rider, who has cycled, swam, and ran his way around some of the most difficult routes in the country. But none of it came to him easy.

At six years old, Vinod met with an accident and lost his leg. At this time, he also the faith that his father had in him. “My father thought that without my leg, I would be good for nothing. He expected me to end up on the streets.” Vinod realised that he is his only support system. Who does he have to thank for his 20-year-long journey? Without skipping a beat, Vinod admits, “I owe everything to God. I am what I am today because of God’s grace.”

Vinod’s story begins with the simple, childhood dream of riding a motorbike one day. “There are certain stereotypes associated with a rider: being manly, ‘macho’ and strong,” says the rider. He believed that he never fit into this stencil — and perhaps this was the driving force that led him to strive even harder to be a biker. That — and in his own words — the ‘dug-dug-dug’ sound that a policeman’s Royal Enfield made. These were the small pieces that came together to form the big picture of Vinod’s life. But, the most important piece of this picture was the prosthetic leg that he received at the age of 27. “My life turned around after I received the artificial limb in 1997 — it was as if I had been handed a new life,” he recalls.

Having battled a troubled past, a prosthetic leg was the first step of a new journey for the biker. “My new leg helped me not only walk, but chase my dreams,” he says. With a new boost of confidence, Vinod fought away his childhood fear — to fight against the echoes of ‘langda, langda’ that had always followed him. It hasn’t been a smooth ride, however. “My fear of rejection kicked in. I was scared to ride the bike. But after a few hesitant tries, I realised that this is what I was meant for.” Vinod mastered the bike in a mere 30 days. Fuelled by the outsider treatment he received from the biker community, he established the first biker’s club for the differently-abled: the Convoy Control Club.

Amid like-minded people who accepted him, Vinod found himself crossing unimaginable boundaries. With a horde of mountain-riding, cycling and trekking expeditions under his belt, he has paved the way for the differently-abled rider community in the country. “There is a different craze that surrounds Rider Mania — months of practice, riding all the way to Goa and the excitement of meeting after a long time.” In what is the largest gathering of Royal Enfield riders in the world, Vinod hopes to bring about a difference this year. “I’m planning to raise awareness about the importance of wearing helmets at the festival this year. It’s just as important to be safe while riding as it is to have fun,” he gleams.