Cruising next to copters

In 2014, before my first solo kayaking expedition from Bombay to Goa, I would take the kayak out to sea at Marine Drive, Mumbai. 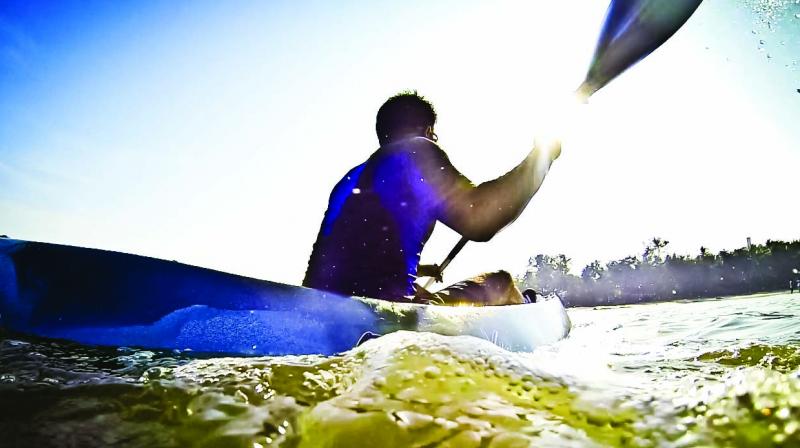 A couple of fishing boats went past and I waved as I often do. That’s when the helicopter ran right overhead. I thought very little of it. It wasn’t till the second pass that I started to have my apprehensions.

In 2014, before my first solo kayaking expedition from Bombay to Goa, I would take the kayak out to sea at Marine Drive, Mumbai. I would be in the water for hours. But once boredom hit, I decided to venture out. Due South of my launch site is Navy Nagar, a restricted naval area that ends with a long reef jutting into the sea. At the tip of it stands Prong’s Lighthouse. On a low tide, you can appreciate the waves slapping the long line of rock and marvel at the beauty of this symbol of safety. At 9 kms one way, it’s at least a 4-hour kayak trip to and fro on my primitive kayak. It was on day 2 of my lighthouse routine that things took an unexpected turn. Like before I paddled up to the rock, waved at the curious lighthouse staff, dove into the channel for a bit, and finally turned my kayak around to hear the faint dim of a helicopter. A couple of fishing boats went past and I waved as I often do. That’s when the helicopter ran right overhead. I thought very little of it. It wasn’t till the second pass that I started to have my apprehensions. The blue-gray colours of a navy chopper flying past at a pace that made my drudgery that much more pronounced. Flying right overhead a second time. The copter turned in a circle and as it came around back a third time, I had no misgivings. It was me they were coming for.

Instinctively I had my camera on and I looked up as the chopper stopped less than 50 metres away from me; a ladder height off the water. The blades slicing through the, now-heavy, air that separated us. As it hung there, looking at me, and I back at it, I’ll never know if something was said. The sound of the rotor was overwhelming and the downdraft from it, kicked up a fair bit of spray. My options were limited. So, I gallantly raised my water bottle & offered them the only thing I had on board with me. Maybe the pilot wanted to take me up on the offer, or he was unimpressed by my reaction to his fine vessel, but the next thing he did was bring the craft even closer to me for inspection. The resulting downdraft made a ripple in the water that ran through the kayak and me. I got the message. An hour of nervous paddling ensued; ripe with the images of a committee of cops awaiting my arrival. But I touched land and nobody came forward to slap the cuffs. I washed up. Tomorrow I’d head North.