When setting off on a 13-day return trip to Antarctica, these seven Hyderabadis didn’t imagine home could be so far 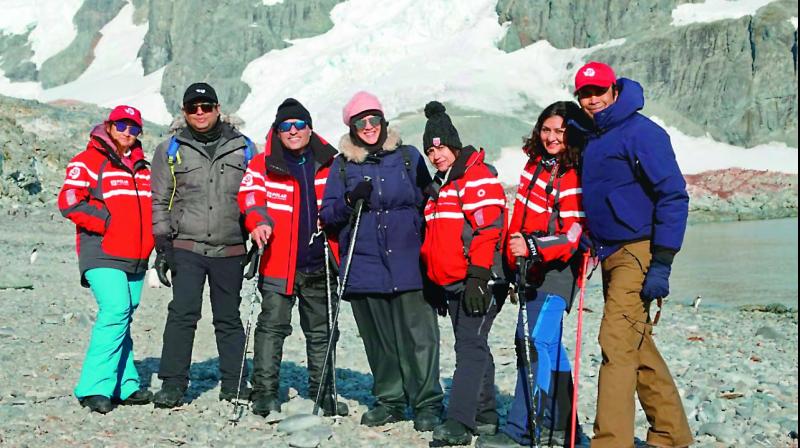 A group of seven Hyderabadis on a 13-day trip to Antarctica. (DC Photo)

A group of seven Hyderabadis headed out on a 13-day trip to Antarctica, zodiac-cruising through exotic locations. They hung out with emperor penguins, seals, whales and a myriad of exotic life forms in the vast white wilderness, covered with enormous ice shelves and craggy crevasses of magnificent glaciers  all of which left them spellbound. They knew this would indeed be their most memorable trip, ever. And it was, but in more ways than one.

After experiencing magic on the coldest place on earth, the group reached London via Buenos Aires on 19 March. A connecting British Airways flight would have brought them back to Hyderabad the next day, had it not been for the Coronavirus outbreak and the subsequent lockdown, which caused many flights to cancel abruptly. This was just the beginning of their woes.

Even as thousands of Indians are stuck worldwide owing to the lockdown, this group of seven, among whom are three couples desperate to return to their families back home pooled in all their resources and reserved a chartered flight to fly them down to Hyderabad.

However, their repeated pleas for necessary clearances for flying into Hyderabad has yielded no results. The group of seven finds themselves feeling helpless, fuming at the Narendra Modi-led NDA government for its inaction.

“When I first got in touch with the officials in the Ministry of External Affairs (MEA), they assured us that the Centre will be evacuating all Indians stranded abroad. They assured we will be allowed to fly out of the UK by 20 April. But now they tell us it’s not possible. All countries are evacuating their citizens, and it is surprising why India is not allowing us to return,” Ravinder Kumar Agarwal, managing director of Ravi Foods private limited (Dukes), tells Deccan Chronicle from Nottingham, UK.

Incidentally, all seven have submitted an affidavit to the Indian Embassy in the UK, saying that they’d be happy to quarantine themselves anywhere the government sends them as soon as they land in Hyderabad.

“We also wrote to the Telangana and Andhra Pradesh state governments seeking guidance and support. While a senior government functionary in Telangana to whom I sent repeated messages did not even bother to respond, the AP government wrote to their officials in New Delhi to extend all possible help in getting us back,” Ravinder adds.

Sunil Saraf, Chairman of Radha TMT Steels and another member of the group, tells us that soon after their connecting flight was cancelled on 19 March, British Airways looked at other possible routes to fly them into Hyderabad including Qatar, Doha and Amsterdam.

“However, by then all routes were shut. In London, we got a visa and were put up at a hotel near the airport. The next day, we went to Nottingham and moved in with a friend. But we would like to come back to our country now,” says Sunil.

However, both businessmen seem to be hopeful that they’d fly out of the UK in the next few days. “We are keeping our fingers crossed. The UK government has given us the green signal for the take-off, but our government appears to be ignoring their own citizens. I am not sure if we will be allowed to land in Hyderabad even by May end. Our families back in Hyderabad are worried,” Sunil tells us.

A long way from home

The chartered plane from the UK to Hyderabad does not come cheap. “It’s a 12-seater aircraft, which costs USD 1,40,000 dollars for the trip. We reserved it by offering a tentative date. But now, we feel let down by our own government, which refuses to give us permission to fly back. We understand their fear, but we have assured that we can be sent into quarantine the moment we land in Hyderabad,” says Ravinder, sounding desperate.

The group’s despair to return home is understandable given that they had reached Antarctica on 24 February and have been away from home for close to two months.