Tourism's gifts and woes for Santa and Sami homeland. 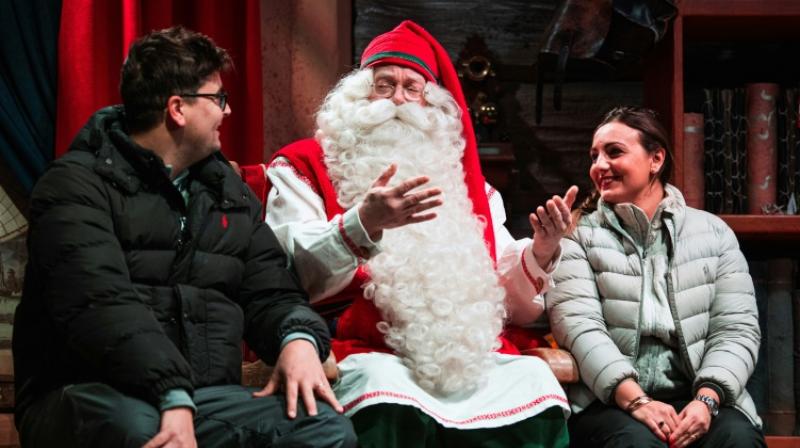 Back at Santa's village, complete with mocked-up presents and rounds of jolly Christmas songs, the last holidaymakers leave the grotto for the evening and the red- and green-clad elves move the countdown on the wall one day closer to Christmas. (Photo: AFP)

At its centre, a wooden, fairytale-esque cabin houses Santa's grotto -- since the 1980s, tourism chiefs have set out to market the main town, Rovaniemi, as the world's official home of Santa Claus. More visitors are now coming to experience winter in the Arctic than ever before.

But Lapland is also the homeland of the indigenous reindeer-herding Sami people, who protest that some in the tourist industry spread offensive stereotypes about Sami people and seek to profit from their ancient culture.

"Almost every day there are people coming to the Sami area asking 'Where can I see the shamans, where are the Sami witches?'" Tiina Sanila-Aikio, president of Finland's Sami Parliament, tells AFP. "It's only a picture that the tourism industry has created and developed," she says.

Once known by the now obsolete term "Lapps", the Sami are spread out across the northern parts of Sweden, Finland, Norway and Russia's Kola Peninsula.

Sami representatives accuse some tourism providers of pretending to be Sami when they are not, or selling products and tourist attractions portraying Sami people as magical and primitive. Last year, the Sami Parliament issued guidelines for "ethically responsible" behaviour from tour operators and visitors in order to preserve Sami culture.

"If, for example, one person refrains from wearing Sami dress because they do not want to be photographed by tourists, that is one person too many," the proposal warned.

Husky rides, among the most popular tourist attractions in Lapland, have also been singled out for criticism by the Sami community, which has herded reindeer across the area's vast fells and forests for over 3,000 years.

Sami representatives claim the dogs, which are not a native Lapland tradition, distress the reindeer which freely roam the forests. The Sami also object to the growing number of "igloo" hotels in the region, which are a non-Lapland tradition borrowed from elsewhere in the Arctic.

The parliament proposal says the igloos risk creating a "mongrel" and homogenised culture in the region, and suggests instead that tourist providers build accommodation relevant to Lapland's history, such as the Sami "goahti" -- a teepee-like wooden tent traditionally used by reindeer herders.

Official statistics suggest that visitors from China spend over three times as much on average as holidaymakers from some other countries. Authorities in Rovaniemi, on the Arctic Circle, face a dilemma: how to reap the economic benefits, while preventing irreversible damage to one of the world's most vulnerable wilderness regions.

"Dog-sledding and longer hikes are popular with French visitors for example, British travellers are especially interested in snowmobiles, and the Asian tourists are most keen on seeing the Northern Lights," Sanna Karkkainen, head of Visit Rovaniemi, tells AFP.

With his knee-length white beard, trademark red robes and oversize grey slippers, Santa switches from Finnish to French to chat to his next visitors, Celia and Jeremie from southern France. After an official photograph, available to buy afterwards for 45 euros ($50), the visitors are ushered towards the exit.

"Super visit, Santa was very kind," Jeremie tells AFP. "We weren't disappointed." Every year this decade, the visitor figures to Lapland have reached new highs, hitting 2.9 million overnight stays last year, up from 2.2 million in 2010, according to Statistics Finland.

Some 45,000 Chinese tourists visited Lapland in 2018 -- four times more than in 2015. The rise followed national airline Finnair dramatically expanding its routes between Europe and Asia and promoting Finland as a stopover hub.

Hotelier Tian Zhang, who moved from China to northern Finland 17 years ago, recently became the first foreign investor in Lapland's hotel scene along with a group of her friends from home.

The 33 cabins at the Nova Skyland Hotel, a striking building of wood and glass which opened in November 2017, are regularly fully booked.

Customers come from all over: Spanish and British before Christmas, "Russians in the beginning of January, and in the Chinese New Year we have Chinese," Tian tells AFP.

The Chinese government, too, keen to establish a presence in the Arctic, has also encouraged its companies to develop tourism in Lapland. Another lucrative market, the Middle East, is also catching on.

"This week we had the first direct Turkish Airlines flight from Istanbul, which of course opens up Rovaniemi to 20 new countries," Karkkainen says.

Booming tourism helped drive Rovaniemi's unemployment rate down to below 10 percent last December, its lowest since 1990 according to the town council.

However, the spectre of mass tourism is a growing concern in a region where residents have traditionally valued tranquility and closeness to nature above all else.

Locals blame the rentals for noise, overcrowding and mess, as well as pushing up housing costs. The concerns are not shared by everyone, though.

"I hope that this individual tourism, people staying in Airbnbs, people travelling individually, will grow," dog-sledding entrepreneur Valentijn Beets tells AFP. "They're actually spreading the money straight to the people without any major players in between."

His voice all but drowned out by the howls of 120 black, white and brown huskies, Beets says his growing business caters to more and more eco-aware tourists.

His clients care about animal welfare and green credentials, he said. "If you want to differentiate yourself from your competitors, this is a growing group of people who think that (being eco-friendly) is important," he says.

Botswana-born Beets and his Finnish wife Veronika set up Bearhill Husky, close to Rovaniemi, in 2012, offering dog-sled safaris through the Lapland forest.

His kennels are a long way south of the Sami reindeer-herding area but he says that "a well-trained dog team, working responsibly" ought not pose a disturbance to others anyway.

Lapland's remoteness and the long distances make for emissions-heavy travel in the region, which scientists say is heating up twice as fast as the global average.

"We are very dependent on flight traffic," Loiro, from the regional council, tells AFP. The council plans to encourage tourists to pay to offset their air-travel carbon emissions as well as develop better rail and public transport links.

The shortening winter seasons have already had an impact on the tourist industry, with operators cancelling tours last year due to an unusually snow-free November.

Loiro believes that the tourism industry is learning to better take into account the region's many competing interests. She said there was now a "responsible tourism network" of operators who recently published a list of "100 deeds for sustainable tourism".

"This includes respecting the Sami culture or using local food, or using biofuels," Loiro said. The regional council recently laid out a four-year plan for making tourism more environmentally and socially friendly, while still encouraging it to grow, she added.

Back at Santa's village, complete with mocked-up presents and rounds of jolly Christmas songs, the last holidaymakers leave the grotto for the evening and the red- and green-clad elves move the countdown on the wall one day closer to Christmas.

So does Santa have less time for delivering presents, now that record numbers of people are coming to see him? "Definitely not," he responds, without hesitation.

"We are in the Arctic Circle now, and time is magic here. You just need to know how to be in millions of different places at the same time," he says. "After practising that for a few centuries, I think I'm managing it quite well."