Tigers in the wild: Viewing the stealthy, large cats in India

India was home to 40,000 tigers a century ago but habitat loss, poaching and population pressure reduced that to fewer than 2,000 by 1970. 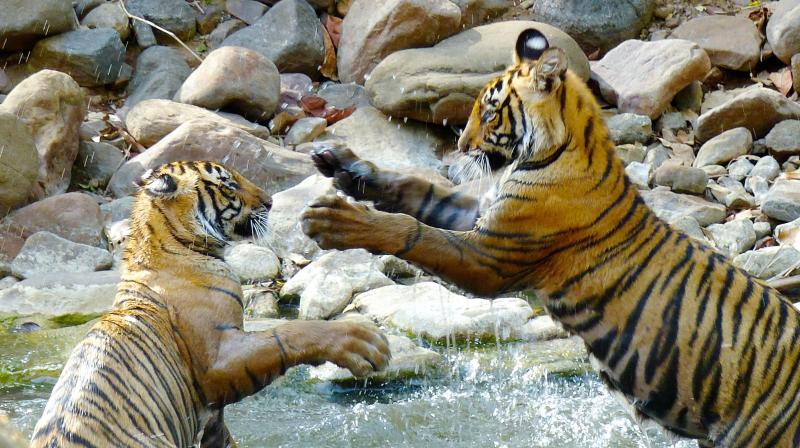 One-year-old tiger cubs are shown roughhousing with one another in a shallow stream in Ranthambore National Park in northern India. (Photo: AP)

Going on safari to India to photograph tigers in the wild is an unrivaled experience. These are the world’s largest cats. They are stealthy, solitary, spectacular and scarce.

But sighting one in its natural habitat is never a sure thing. “All wildlife viewing is opportunistic and needs a certain amount of luck,” said Toby Sinclair, an expedition leader with Natural Habitat Adventures in Delhi.

Here are some things to know when considering a tiger safari.

You can tilt the odds in your favor by arriving when the escalating heat of late spring drives tigers from the thick jungle scrub to more visible waterholes. Some national parks and wildlife sanctuaries are especially rewarding for visitors during the hot months of April to mid-June, Sinclair said.

“This is when the water is limited to a few pools and the animals, both prey and predator, have to come to drink water at least twice a day,” he said. “It is also the time when much of the grass and undergrowth has died back so the areas of view are generally better.”

There’s a trade-off, though. In India, wildlife photographers generally travel in open safari vehicles. That makes it easier to spot bird and animal life high in the tree canopy. But it also exposes you to the punishing sun, making dehydration a possibility with temperatures reaching 115 to 120 degrees F (46 to 48 C). Dehydration can shut you down, causing vomiting, diarrhea, fainting and muscle cramps. You can reduce the risk by eating right and frequently hydrating.

How about other times of the year? “Because of its size and the varied landscapes, there are parts of India that are closed during the monsoon (late June to late September) and a few (parks) that don’t open until November,” Sinclair said.

Weather is cooler in late fall and early winter but it can be harder to see the tigers because the landscape is lush.

“You want to go there when it’s warm but it’s not too late into the summer so you don’t bake to death,” said Joseph Van Os, owner of Joseph Van Os Photo Safaris.

VIEW FROM AN ELEPHANT

Five of India’s national parks (Bandhavgarh, Kanha, Kaziranga, Periyar and Corbett) offer visitors a unique option: searching for tigers from the back of an elephant. It’s a popular way for photographers to access remote park corners.

But be selective about vendors. Some have been known to crowd the cats once discovered in remote scrub. Go with an operator recommended by your travel agent or tour operator rather than chance things onsite or online.

“Getting on elephants in these parks is critical in getting close to tigers,” Van Os said. “You can go right up to the caves where the tigers are sheltering from the heat rather than waiting for them to show up at the waterholes.

“Elephants,” he said, “are the ultimate four-wheel drive vehicle.”

India was home to some 40,000 tigers a century ago but habitat loss, poaching and population pressure reduced that to fewer than 2,000 by 1970. To reverse the decline, India established wildlife sanctuaries that now include more than 600 protected areas along with 50 tiger reserves.

“Most of the larger parks have caps on the number of vehicles that can enter at any one time,” he said.

Africa and India are both rich in wildlife. But they’re worlds apart in what’s available for viewing and how that viewing is managed.

Africa offers “big concentrations of wildlife. It’s not like any other place in the world,” Van Os said. “A lot of species and in big numbers. But in India, it’s specialized. The parks are smaller and the diversity is not there. You go for one or two main species.”

That means tigers, which don’t live in the wild in Africa. “You go to India to photograph tigers,” he said. “All else is peripheral to that.”

I took my tiger safari in late May with Natural Habitat Adventures, a Colorado-based company. From Delhi, our group of six photographers traveled with the expedition leader by train five hours to Sawai Madhopur, where a safari truck drove us another 6 miles (10 km) to the outskirts of Ranthambore National Park and on to our hotel. We took two-a-day safaris for four consecutive days via open truck within the park and saw 15 tigers in various settings, most around waterholes. Prices run about $7,000 for the seven-day tour (plus airfare and insurance, $1,375 more for single supplement).

My warnings about heat come from a hard-earned lesson. I became severely dehydrated going too long without water while walking around Old Delhi. I suffered extreme headaches, weakness and nausea. Luckily, I’d added an extra day to my trip and spent it in a hotel bed downing doctor-prescribed rehydration salts and meds. It took two weeks to fully recover once home.

But I did return with the prize of a shooter’s lifetime: scores of photos taken of these rare, elusive and exceedingly beautiful animals.