On the trail of Pandavas

Techie Vivek recounts his trek to Satopanth Tal, situated amid snow-capped peaks about 15,000 ft above the sea level. 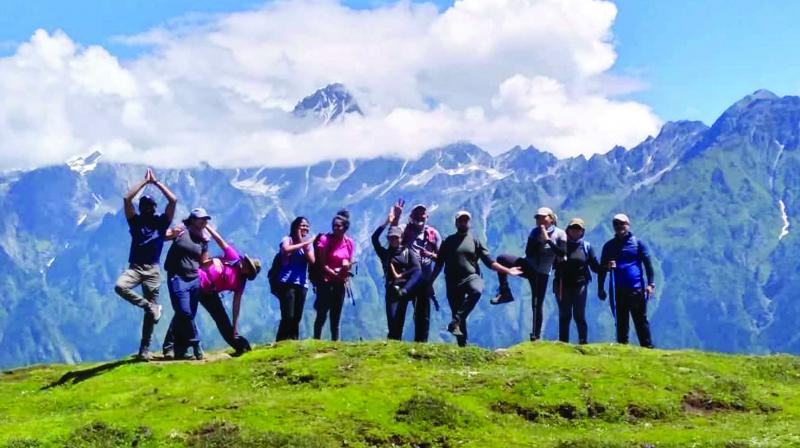 On the first day, our target was to reach Jhamtoli which was about 3,640m above sea level. We saw Vasudhara waterfalls.

Going on a trekking trip has been a pipe dream for me for quite some time, because whenever I made up my mind to go on one such trip, some hindrances — sometimes psychological and sometimes practical — used to present themselves and I easily gave up. So, when this idea of going on a trek to Satopanth Tal, at about 15,000 ft above the sea level came about, I felt rather skeptical even though my wife Ann felt really excited about it. I was skeptical because, going on a trek and that too on this specific trail, needs quite some amount of preparation — physical, mental and practical.

It is believed that the Pandavas made their final walk renouncing the world, trying to find their way to heaven along this way from Badrinath. Ahead of Satopanth Tal lies Mt. Swargarohini along which finally Yudhishtira and the dog ascended to heaven.

Ours was a group of 11 members. We had a four-day trek planned by guide Kundan of Adventure Trips, with seven to nine km of walk each day till the third day which is when we would reach Satopanth. On the fourth day, we had to walk all the way back to the starting point. We needed to be physically fit to be able to complete the walk. On August 25, three days ahead of the trek, we took an early morning flight to Dehradun from Bengaluru. The rest of the group joined us the next day.

The next day early morning we started our 10-hour drive to Joshimath in a tempo traveller, 250 km from Rishikesh, near to Mana village from where we were supposed to start our trek. We reached there around 8 pm and had a good sleep. Next day we had a demo trek planned to Gorson meadow. A cable car took us to a point 4 km along the hills so as to make our hike a little easier. While in the cable car, we first witnessed the beauty of the Himalayan ranges.

By evening, we started to Mana Village, our starting point. But on the way, a massive landslide blocked the road. Our guide Kundan immediately made arrangements to reach the site, but we had to leave our bags in the vehicle. We slept in tent that day, cold and wet, but we managed it.

On the first day, our target was to reach Jhamtoli which was about 3,640m above sea level. We saw Vasudhara waterfalls. It is scientifically proven that the water has medicinal properties and the belief is that the water turns away from people who carry sinful thoughts. It was quite a sight to witness. On the second day, our destination was to reach the base camp at about 4,200m. We passed Sahsradhara waterfalls, where there are multiple waterfalls in close vicinity. The skies cleared to give us a view of the snowcapped mountain of Nilkantha, which reflected its majesty through rainbow colours, as mentioned by our guide.

As we reached the base camp, mist covered the entire area. The day ahead gave us the most difficult trail to walk through. Long stretch of boulders, rocky terrains, multiple waterfalls and mountains had to be crossed to reach the summit. From there we could see Swargarohini glacier. After spending about 15 minutes at the summit, we decided to head back.

It was disappointing that we couldn’t get enough of that beauty. Although we had to cover all the way back to Mana through the same trail, which took the next two days, a new perspective was created on the way back.

(Vivek is a software engineer hailing from Pathanamthitta. He currently works in Bengaluru)