viewing river in Arizona is no longer free 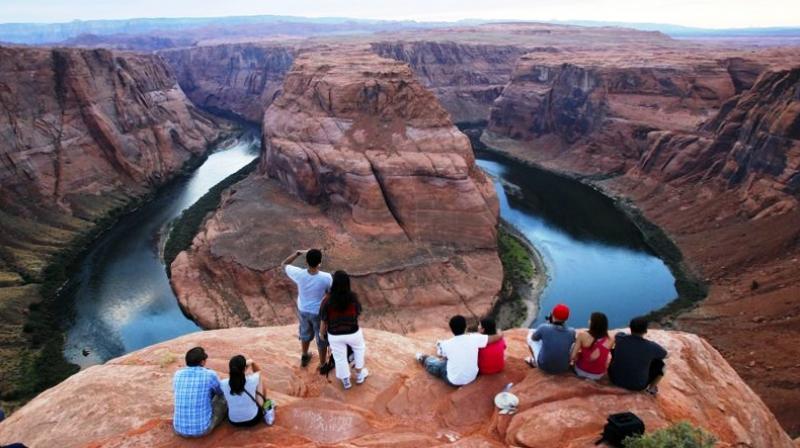 The recreation area is rerouting part of the trail that has a sandy, steep ascent to make it accessible to the disabled, and has plans for shade structures. (Photo: AP)

Arizona: Parking at a spot near the edge of an Arizona canyon where the Colorado River makes a sharp U-turn now comes at a cost. You can blame that mostly on social media.

Countless posts have celebrated the wonder of Horseshoe Bend, where the bluish-green river takes a 270-degree turn just outside the town of Page, near the Utah border. Photographs on Facebook, Instagram and elsewhere show tourists dangling their feet over a more than 500foot (152-meter) drop, staring contemplatively or throwing their hands in the air.

Chances are, the tourists are surrounded by hundreds of people from around the world who marvelled at the site online and wanted to see it in person. The traffic and safety concerns that come with the site’s popularity are what led officials to start charging a parking fee this month.

“Most people in Page will say that as short as five to six years ago, it was a relatively local spot, and then it just started growing exponentially,” said Mary Plumb, a spokeswoman for Glen Canyon National Recreation Area, which encompasses the canyon. “Most people believe it’s caused by Instagram.”

Page recently completed the first phase of a parking lot that has 160 spaces. The cost starts at USD 5 per motorcycle and USD 10 per vehicle, and goes up for commercial vans and tour buses, depending on how many passengers they carry. A second phase that will be completed next month will add 140 spots. An overflow lot with 300 spaces has shuttle service to the site.

From the parking lot, tourists hike less than a mile to the canyon’s rim and can see the river bend either from a platform with safety railings or with nothing but open space in front of them. The viewing platform opened last year, and the recreation area is rerouting part of the trail that has a sandy, steep ascent to make it accessible to the disabled, and has plans for shade structures.

Parking was a free-for-all in a dirt area before Page decided to develop the lot, city manager Mike Celaya said. Law enforcement officers routinely patrol the area to direct traffic and keep tourists from parking along the highway. Two years ago, a tour bus that didn’t see a tourist in the parking lot hit and killed the person, Celaya said.

“We felt that a more orchestrated, more coordinated parking structure would obviously be a remedy to some of the issues and challenges the city was facing,” Celaya said.

The congestion isn’t unique to Horseshoe Bend. Other places around the West, including Hanging Lake in western Colorado, Conundrum Hot Springs near Aspen, Colorado, Fossil Creek in northern Arizona, and Phantom Ranch in the Grand Canyon, have started charging or requiring permits or reservations to visit.

Page plans to use the revenue to pay for the development, which eventually will include restrooms and a visitor’s centre, maintain the improvements and provide emergency services, Celaya said. He said the city has spent USD 5 million so far. Officials estimate up to 2 million people visit Horseshoe Bend annually.

James Hamilton, of London, recently spent five days in Page visiting Lake Powell, Antelope Canyon and Horseshoe Bend. He said he was drawn by online research that declared Horseshoe Bend one of the region’s must-see places and said it was “better than in the pictures.” He and a friend arrived by bicycle just before the implementation of the parking fee, which doesn’t affect bicyclists.

“I understand why there’s a need for some facilities at that area, maybe for the disabled access, or toilets or parking,” he said. “But it would be better if it was free or if it was included in some wider pass where you could access lots of different areas.”