After Mexico quakes, Day of the Dead parade honours rescuers

700 performers prepared for months for the colourful afternoon procession along more than 7 km of the expansive Paseo de la Reforma. 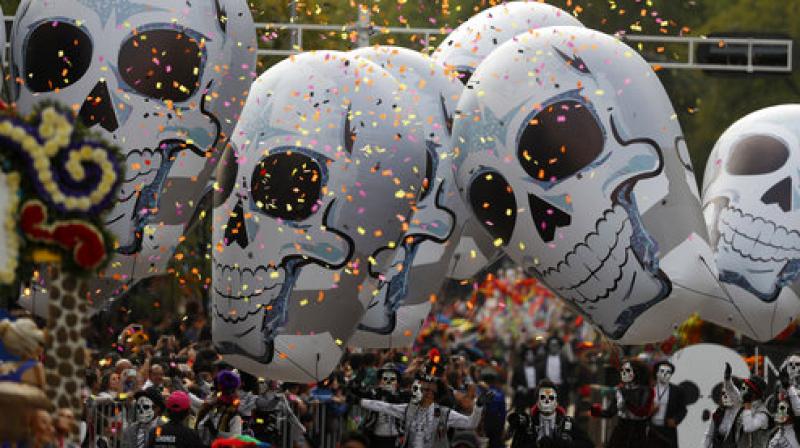 MEXICO CITY: Dancing devils, towering skeletons and altars festooned with marigolds made their way down Mexico City’s main thoroughfare on Saturday to commemorate Day of the Dead in a country still mourning nearly 500 people killed in earthquakes in September.

More than 700 performers prepared for months for the colorful afternoon procession along more than 7 km of the expansive Paseo de la Reforma. The two destructive earthquakes in September prompted some late changes to the program.

A raised fist constructed out of hard hats and pick-axes led the way in the parade, greeted by cheers and applause from thousands of onlookers. Just behind, a group in fluorescent aid-worker vests marched with fists in the air - a tribute to the rescuers who made the gesture to demand silence as they listened for survivors in the rubble from the second quake, on Sept. 19, which toppled dozens of buildings and killed nearly 230 people in the capital.

But the strongest earthquakes in more than three decades did not diminish a centuries-old Mexican celebration. Participants and onlookers alike painted their faces as colourful skulls, many in the style of Mexico’s iconic skeleton figure known as “La Catrina.”

“For us as a society it was something very violent that moved our conscience,” said Ramon Marquez, 51, wearing an orange t-shirt emblazoned with the phrase #fuerzamorelos (Be strong Morelos) referring to one of the areas affected in the quake. “The parade could be a distraction, a way of escaping.”

Sponsored by Mexico’s tourism and culture ministries, the parade was triple the size of last year’s maiden effort, inspired by a Day of the Dead parade featured in the opening sequence of the 2015 James Bond film “Spectre.”

Three young women wore La Catrina-style face paint, large feathered hats and 1900s-style dresses that they said had been used in “Spectre.” This year’s festivities took on a new feeling of solidarity after Mexico´s deadly earthquake, they said. “We’re not only here to celebrate and dance, but also when there’s a disastrous situation we come together to help,” Violeta Canella Juarez, 31, said.

Some 200,000 people attended last year, and local media reported at least 300,000 people at Saturday’s parade. The parade concluded with mariachi musicians belting out Mexican folk songs from a float covered with flowers and colored paper like the boats that cruise the canals in the south of the city. Women dressed in wedding gowns danced with their grooms, both with faces painted as skulls.

Although Mexicans typically celebrate Day of the Dead on Nov. 2 in town plazas, homes and cemeteries, the Bond film’s popularity prompted Mexico City officials to put on a carnivalesque spectacle. Even so, the event’s organizers say the parade is not about emulating a Hollywood production.

“The point of this parade is to celebrate life,” said Anima founder and Artistic Director Alejandra Gonzalez Anaya. “It’s to put on the radar of Mexicans an important tradition ... so we feel proud of showing something so important from Mexico to the world.”