To also focus on improving perception of Delhi police. 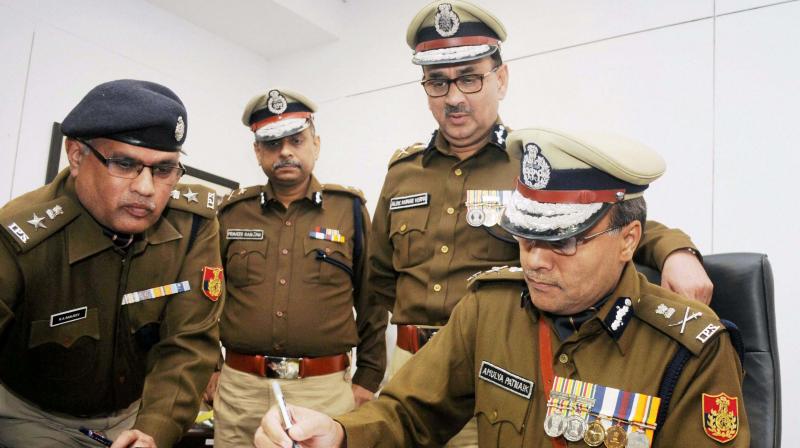 New Delhi: Amulya Kumar Patnaik, who formally took charge as commissioner of Delhi Police on Tuesday, said that his focus will be to work to improve the perception about Delhi Police even as he said that the relationship with Delhi government “has been fine all along”. Patnaik (57) succeeded Alok Kumar Verma, who has been appointed as the CBI director, to become the 21st commissioner off the force with a strength of close to 80,000 personnel.

“We will work on ensuring that the perception of Delhi Police should be better in the eyes of the public. I have grown with this force for more than 30 years,” said Mr Patnaik, adding that Delhi Police was one of the best in the country. They are definitely the most hard-pressed in the country and they are doing a wonderful job. But still somehow, somewhere, the perception about police, I think needs to be made a little better and we will work on it,” he stressed.

Mr Patnaik also said that the focus will be on making women feel safer in the national capital. “Women safety will always remain an area of priority. Safety of children and senior citizens too is very important. We will do our best to further see how women in the city can feel safer,” he said while speaking to mediapersons. He is known to have started a number of helplines for women’s safety, including the anti-stalking helpline and anti-obscene calls helpline in his earlier stints.

He also said that he would try and improve the grirvance redressal system. “Our public grievance redressal system is good and we are able to reach out to the public and public can meet officers at any level. But we will still see where exactly we can improve it further. The effort will be to reach out to the people of all sections of the society,” he said.

Mr Patnaik also highlighted that digitalisation and tackling cyber crimes will be key focus areas. “We will focus also on digitalisation of the police functions. Digitalisation will be an area of priority. We can see how much we can work on it,” he said. .

Mr Patnaik’s predecessor Mr Verma had always asked his officers to curb street crimes, and the new top cop reiterated the words of his predecessor. “Street crime have been controlled to a large extent in the last one year and they have come down. Heinous crimes have also come down and those things will be continued,” he said.

As commissioner of Delhi Police, Mr Patnaik will inherit a range of pending cases, including that of Sunanda Pushkar’s death and disappearance of JNU student Najeeb Ahmed.

As commissioner of the Delhi Police, Mr Patnaik will have one of the longest tenures as the head of the force. Mr Patnaik, who is 57 years old, will retire in January 2020, thereby allowing him to serve as the top cop of the force for almost three years.

Earlier in the day, Mr Verma was given a farewell parade where many of the personnel, who were part of the massive promotions granted to 26,000 personnel, shouted, “Verma ji ki jai”.

Later in the day, Mr Verma was given a farewell near the front lawn to the sounds of dhol with the top brass of Delhi Police wishing him luck for his new assignment. Mr Verma thanked his personnel for supporting him.

“It is time to bid farewell. As commissioner, my first priority was to curb street crimes and provide security to women and children. It is with your support that I achieved success in all these spheres in 2016. This has been possible due to your hard work,” Mr Verma said, while addressing police personnel at his farewell parade.