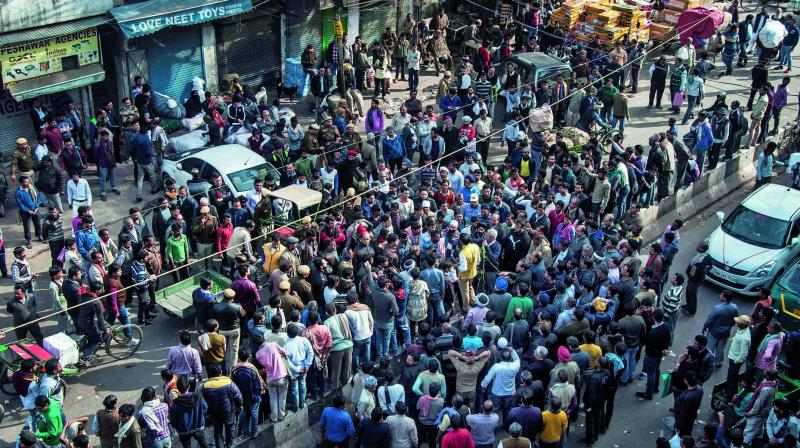 Traders shout slogans during a protest against sealing at New Qutab Road market near Sadar Bazar in Delhi. (Photo: PTI)

New Delhi: Amid the blame game over the ongoing sealing drive in the city, Delhi chief minister Arvind Kejriwal on Wednesday met lieutenant governor Anil Baijal, exhorting him to provide immediate relief to the traders who were in “distress.”

“@arvindkejriwal met me today and discussed issue of ongoing sealing of shops/commercial properties in Delhi. Informed him that already all possibilities are being explored, keeping in view judicial pronouncements and laws. Some solution will be evolved very soon,” the L-G tweeted after the meeting.

Mr Kejriwal in response to the L-G urged him t resolve the situation soon. “I will urge u to kindly do it soon sir. Traders are really in distress. And we all have to work together for the develiopment of Delhi. I assure u of full support,” Mr Kejriwal tweeted.

Earlier, Delhi Assembly Speaker Ram Niwas Goel launched a scathing attack on the L-G saying that he had “violated Indian culture” by not giving him time for a meeting despite two requests.

Mr Goel said that he had written two letters to the LG, on January 4 and 10, asking for an appointment to extend New Year greetings but Mr Baijal did not give an appointment. “Even the President gives time to meet me,” the Speaker said and added that former lieutenant-governor Najeeb Jung had never declined to meet him (Mr Goel). Although he was not given an appointment, Bharatiya Janata Party MLAs were given time to meet the L-G whenever they requested, Mr Goel said.

Mr Goel wrote another letter to the lieutenant-governor on Wednesday in which he said that he has been observing the developments in the capital “with a sense of deep anguish”. Mr Goel said Mr Baijal’s conduct “does not add to the dignity” of his position.

He complained that a majority of Delhi legislators also struggled to get time from the L-G’s office. Mr Goel alleged that the four BJP MLAs had “unhindered access” to the L-G’s office and that the opposition party holds its legislature party meetings there.

He wrote that had the L-G spared time for AAP MLAs, the current crisis due to ongoing sealing drive would not have arisen.

The Aam Aadmi Party, the BJP and the Congress have opposed the sealing drive but there hasn’t been any solution so far to the problem. Mr Goel said that public interest can only be protected if Mr Baijal “breaks free from narrow-minded clique which at all costs wants to harass the people of Delhi”.