Shyam Jaju termed Mr Sharma as an asset for the BJP who will boost winning chances of the party candidates in the Lok Sabha elections. 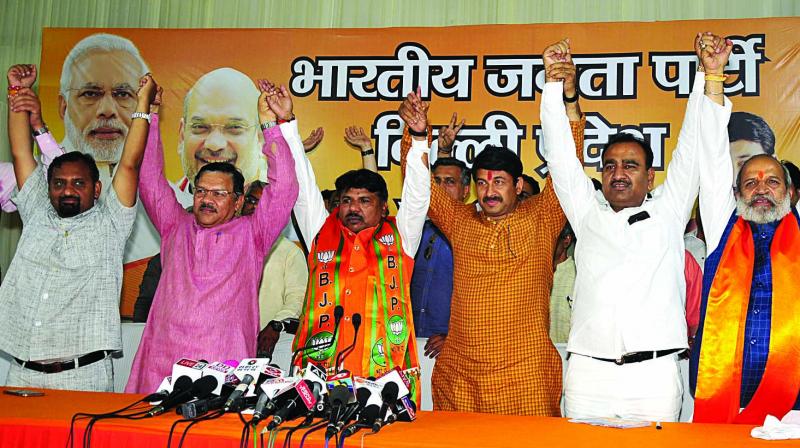 New Delhi: Former Congress MLA Bhisham Sharma, who was expelled from the party last week, joined the BJP on Tuesday in a boost to the saffron party’s Delhi unit chief Manoj Tiwari, who is contesting the Lok Sabha polls from Northeast Delhi constituency. Mr Sharma, who was a Congress MLA from Ghonda Assembly segment under Northeast Delhi parliamentary constituency had a long-running difference with the party’s Delhi unit chief Sheila Dikshit.

He was expelled from the Congress for six years on charges of anti-party activities. Mr Sharma was welcomed into the BJP fold by party national vice president and its Delhi unit in-charge Shyam Jaju and Mr Tiwari.

Mr Jaju termed Mr Sharma as an asset for the BJP who will boost winning chances of the party candidates in the Lok Sabha elections. Mr Tiwari said, “How can a patriot like Mr Sharma be with Congress whose president uses ‘Gandhi’ surname but talks about ‘Jinnah’.”

On joining the BJP, Mr Sharma said that he was in pain, when Congress leaders started asking questioning about surgical strikes and Balakot airstrikes.