This segment will be a major driver in the growth of e-books. Publishers have also been responding to the demand for digital content. 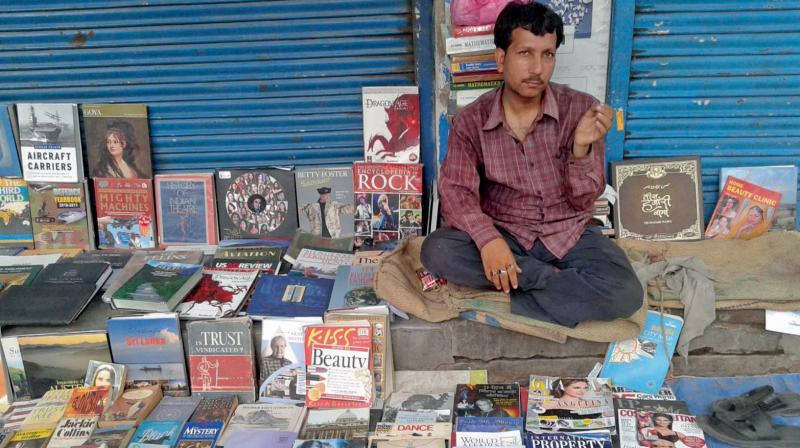 A bookseller in Daryaganj market.

New Delhi: Daryaganj, situated in Central Delhi, has over the years become synonymous to its Sunday book market. However, thousands of book lovers and avid readers, who once thronged the bylanes of the famous market, have now changed their course.

Once a bustling hub of assorted collections of books, the Daryaganj book market is unable to attract readers anymore, courtesy the growing market of e-books.

Neeraj Kumar, who owns a bookstall in Daryaganj market, said that in a span of 16 to 17 years the market has never seen such a downfall. “Due to the prevailing situation, I had to replace my stock with general study materials and sample papers,” he said.

He added that in the past few years, the footfall has decreased marginally with only students preparing for competitive exams or studying in schools visiting the market.

Another bookseller, who has been selling books here for the past 50 years, said that the market is facing a shortage of avid readers.

“Earlier, there was no other way of reading books except for physical copies. However, in recent times people have other mediums to enjoy reading,” he said.

According to the ‘India Book Market Report’ released by Nielsen in 2016, the market of e-books accounts for less than 10 per cent of the top line publishers in India. This figure is expected to grow to about 25 per cent by 2020. Another global survey conducted by Nielson reports that 54 per cent of people use their smart phones or any other medium to read books.

The market of e-books is expected to grow in the coming years because of higher education and academic spaces. As per data released by the HRD ministry, India has more than 650 universities and 30,000 colleges.

This segment will be a major driver in the growth of e-books. Publishers have also been responding to the demand for digital content.

With the advent of e-books and its growing market, the future of these booksellers seems to be in uncertainty. Now, the big question is whether this popular book market, which has been there for the past 50 years, will survive against the ever-growing e-book era.