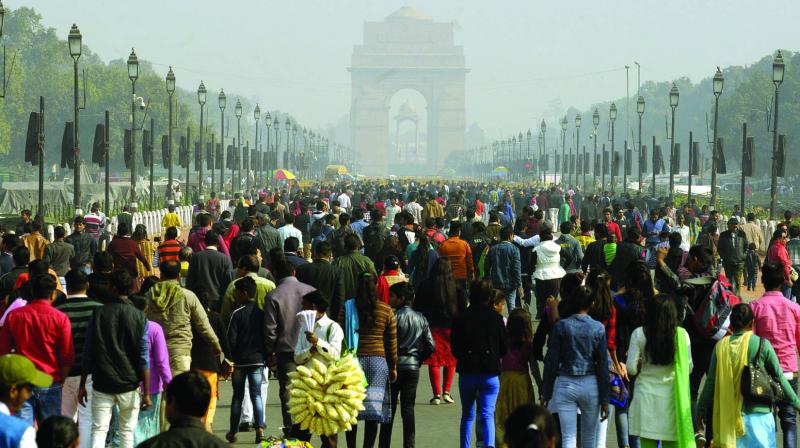 NEW DELHI: Soaked in festive spirit, thousands of Delhiites braved chilly weather and severe air pollution on Tuesday to throng restaurants, pubs and malls and lounged in open public spaces like the India Gate and Connaught Place to celebrate the New Year, with the police remaining on toes to avert any untoward incident.

The swelling crowd also prompted the Delhi Metro to close exit facilities at four major stations in central Delhi, including the ones at Pragati Maidan and Central Secretariat.

“As per instructions received from the Delhi Police, exits at four stations — Central Secretariat, Udyog Bhavan, Mandi House and Pragati Maidan metro stations — have been blocked with immediate effect due to swelling crowd,” an official said. The police said that around 75,000 to 80,000 people had gathered at India Gate, which caused heavy congestion in and around the area.

Mayuri Sharma, a B.Sc student, became a victim of the traffic congestion as it took her more than an hour and a half to cover an 8 km distance. “The traffic was really bad and it seemed that all citizen of Delhi were out on the streets and heading towards central Delhi to celebrate the New Year,” she said.

With minimum temperature settling at 7 degrees Celsius, revellers had a perfect setting to indulge in celebrations hosted at various hotels, malls, restaurants, pubs and farmhouses. However, air quality of the city oscillated between ‘very poor’ and ‘severe’.

The police on Monday had also advised visitors, heading out for celebrations, to use public transport as there is an acute shortage of parking space at India Gate.