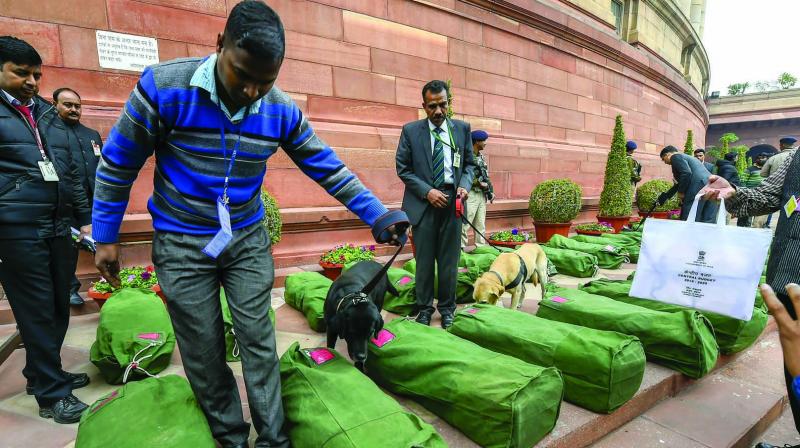 Sniffer dogs inspect bundles containing the copies of interim Budget before they were carried to Lok Sabha in New Delhi. (Photo: PTI)

New Delhi: The Centre on Friday allocated Rs 1,112 crore for Delhi in the Union Budget, while keeping its share in central taxes and duties unchanged.

In the Budget, Rs 10 crore has also been given to the AAP government for paying enhanced compensation to the 1984 riot victims. The same amount had been given in the 2018-19 Budget.

Apart from this, the grant for the Delhi Disaster Response Fund remained unchanged with an allocation of Rs 5 crore.

Meanwhile, terming the Budget the “final jumla” of the Narendra Modi government, chief minister and AAP national convenor Arvind Kejriwal on Friday said it has disappointed the city.

Mr Kejriwal rued the “stagnant” share of Delhi in Central taxes and his pa-rty too alleged “step-motherly treatment” by the BJP government at the Centre.

“Final jumla of Modi govt: it’s interim budget too completely disappoints Delhi. Our share in central taxes remains frozen at Rs 325 crore & nothing earmarked for local bodies. Delhi continues  to be on its own financially (sic),” he wrote on Twitter.

He also tweeted, “1. Invest heavily in edu n health 2. Increase min wages n enforce it 3. Give crop prices 1.5 times cost 4. One time farm loan waiver. This wud put money in pocket of poorest, create demand, give boost to economy n create jobs. None of it done in budget (sic).”

The ruling party in Delhi termed Mr Goyal’s Budget speech an “election speech” of a government hardly four months away from its “departure”.

“The BJP government at the Centre has given step-motherly treatment to the people of Delhi. From 2001, the Centre is giving only Rs 325 crore to the Delhi government despite getting lakhs of crores of rupees collected as taxes. As per the Finance Commission recommendation, it should be around Rs 70,000 crore,” AAP spokesperson Raghav Chadha said.