Helicopters taking off and landing as part of ‘Delhi Darshan’ initiative upsets locals. 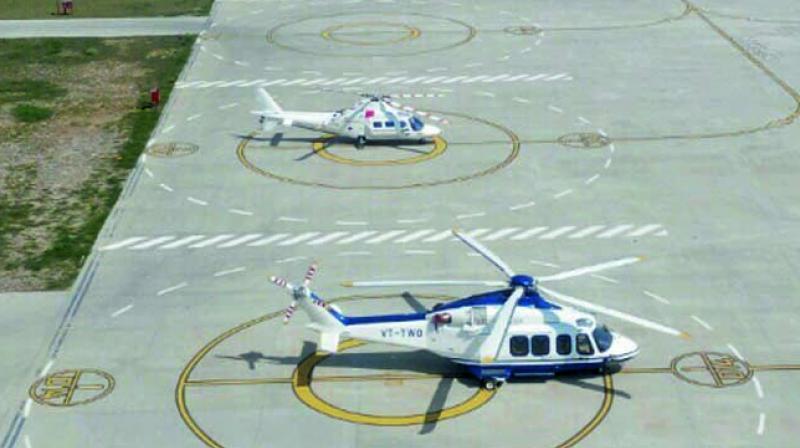 A file picture of helicopters parked at the Rohini heliport in North Delhi.

New Delhi: Residents of North Delhi have complained of noise pollution due to the aerial “Delhi Darshan” started by a national copter operator on Saturday. The residents said that helicopters passing over their houses every few minutes create disturbances and add noise pollution to the environment.

The state owned aviation firm, Pawan Hans, has started aerial rides from Saturday from its newly inaugurated Rohini heliport in North Delhi for visitors who can take a helicopter ride and experience aerial views of Pitam Pura Tower, Majnu ka Tila, Red Fort, Rajghat, Akhshardham Temple, and the surrounding areas. It is offering a 20-minute sortie for Rs 4,999 per person and a 10-minute ride for Rs 2,499 per person.

“All day there has been an unusual movement of helicopters above our house since today morning. There is a helicopter flying overhead every few minutes. Our first response was if some calamity or something like that has taken place and with prayers, we turned on the news on our TV set. When we didn’t find anything, we Googled it, only to learn that an aerial tourism service has been started in Delhi from today,” said Govind Singh, a resident of Parmanand Colony in North Delhi and a professor in Delhi University. He has written a letter on behalf of his NGO, Delhi Greens, to the carrier to not fly helicopters over the residential areas. “You are requested to kindly rethink the idea in the interest of peace and tranquillity of Delhi city,” he said, adding that at a time when Delhi is reeling under all kinds of pollution, “a helicopter passing over our head every few minutes is not the kind of noise pollution we want to live with.” According to norms, the ambient sound level should not exceed 55 decibels during the day and 45 decibels at night. Environment activists also said that flying helicopters at such a low height is likely to have a detrimental effect on the bird corridor in the city and can lead to the already dwindling population of birds.

“It’s unfortunate that there is no study regarding the effect of such activities on the bird corridor. But prima facie and according to the general observation, there can be an adverse effect on them (birds) as these helicopters will not be flying at a great height,” said environment activist Vikrant Tongad of Social Action for Forests and Environment (SAFE).

The chopper operator could not be reached for comments as calls to its office went unanswered.