AAP crisis deepens as Kumar Vishwas hints he may quit

Several MLAs too are in favour of a greater role for Vishwas in the AAP after the party's poor show in the Punjab Assembly and MCD polls. 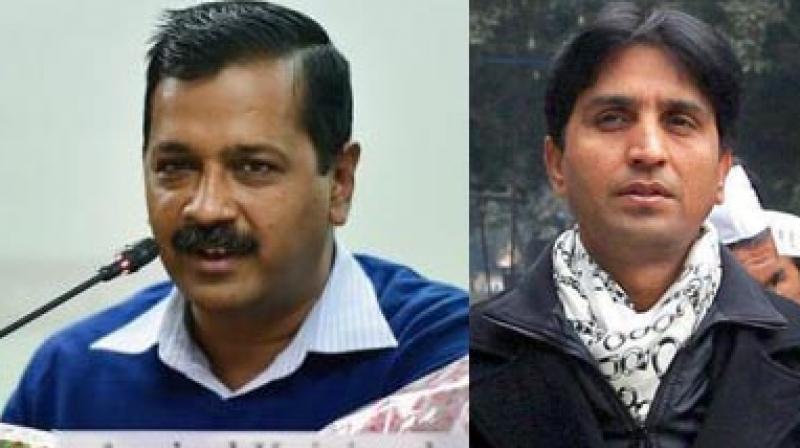 New Delhi: The crisis in the AAP deepened on Tuesday after senior leader Kumar Vishwas indicated he could quit the party, alleging conspiracies were being hatched against him.

Vishwas also appeared defiant despite the party's gag order of not talking to the media and said he will keep highlighting the mistakes of the Aam Aadmi Party and say what is right in the interest of the country.

Amid murmurs that he wants to head the party, the poet-turned-politician said he harbours no ambitions to become chief minister, deputy chief minister or AAP national convener.

Several MLAs too are in favour of a greater role for Vishwas in the AAP after the party's poor show in the Punjab Assembly and MCD polls.

"I have conveyed this to Arvind, Manish (Sisodia) and I reiterate it today that I don't want to become chief minister, deputy chief minister or AAP's national convener.

"I don't know what you want to do, but I don't want to do this," Vishwas told reporters outside his Ghaziabad residence, as he turned emotional.

The AAP leader was particularly upset with Okhla MLA Amanatullah Khan who on Sunday had alleged that Vishwas was plotting a coup against party chief and Delhi CM Arvind Kejriwal and that he was an "RSS-BJP agent".

He said Khan was merely a "mask" behind those hatching conspiracies against him.

"Had Amanatullah Khan said anything like this against Arvind or Manish, he would have been shown the door in 10 minutes," Vishwas said.

Reacting to this, Deputy Chief Minister and senior AAP leader Sisodia said Vishwas' comments are only hurting the party and affecting morale.

"He doesn't talk in the PAC. He should put forth his views in the PAC," Sisodia said.

Earlier, Vishwas had differed with Kejriwal on the issue of electronic voting machines (EVMs). He had refused to attribute the AAP's recent poll losses to alleged manipulation of EVMs and had instead stressed on the need to introspect.

However, it appeared to have yielded no results. Vishwas also remained adamant on Khan being sacked from the party. Khan had resigned from the party's Political Affairs Committee (PAC) on Monday.