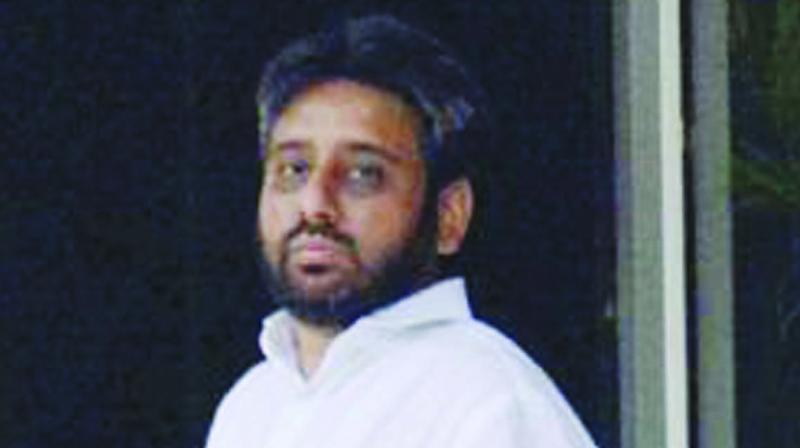 New Delhi: A day after he accused Aam Aadmi Party leader Kumar Vishwas of plotting a coup against party chief Arvind Kejriwal, the party’s Okhla MP Amanatullah Khan on Monday resigned from his post in the political affairs committee (PAC). The PAC was held at Mr Kejriwal’s Fragstaff Road residence and Mr Khan attended the meet briefly and left midway.

His supporters, waiting outside, protested his resignation. Standing by what he had said earlier, Mr Khan spoke to reporters and made further allegations against Mr Vishwas calling him an “RSS agent”. He also said that while AAP ministers were getting arrested in the past, Mr Vishwas was celebrating his birthday party with former delhi commissioner Mr Bassi. After the meeting ended late on Monday night, deputy chief minister Manish Sisodia confirmed Mr Khan’s resignation and said that the PAC condemned Mr Khan and Mr Vishwas for making irresponsible comments in public. He added that they should have taken up the issue with the party first.

Earlier in the day, in an attempt to placate senior Mr Vishwas, Mr Kejriwal sent his Mr  Sisodia to his residence. Mr Viswas was reportedly assured of action against Mr Khan.

It was also the first occasion when Mr Kejriwal visited Mr Sisodia’s house after taking charge as the Delhi chief minister. It is believed that in the PAC meeting, majority of the members were of the view that disciplinary action should be taken against Mr Khan who went public with his allegations rather than talking to the party leadership. Mr Khan has been asked to prove his allegations, failing which he may face suspension, according to AAP insiders.

On Monday morning, Mr Kejriwal warned leaders for working against the party. He drove to Mr Sisodia’s residence for a two-hour meeting before sending him to Mr Vishwas’ Delhi residence along with another senior party leader Sanjay Singh, who is said to be of the anti-Vishwas faction. 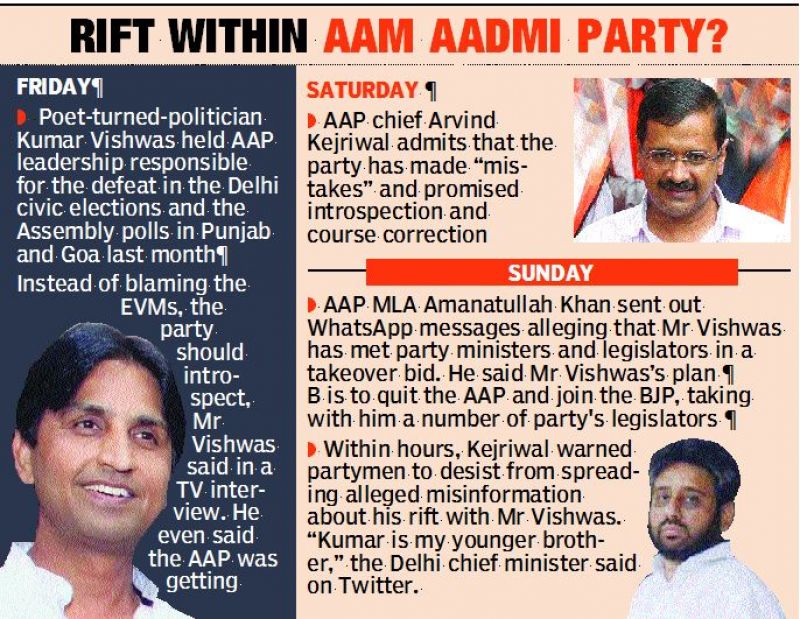 On Sunday, Mr Khan had sent out WhatsApp messages alleging that Mr Vishwas had met party ministers and MLAs in a takeover bid. He said Mr Vishwas’ plan B was to quit AAP and join the BJP, taking with him a number of the party’s legislators in Delhi.  Mr Khan is known to be close to Sanjay Singh and leaders like Dilip Pandey and Brijesh Pathak, who took the fall for the party’s defeat in the civic polls and have resigned. Mr Vishwas’ supporters see in Mr Khan’s accusations an attempt to stall any move to assign him any important position in the party.

So far, Mr Vishwas has only had charge of AAP’s overseas affairs. The allegations came after Mr Vishwas told a TV news channel on the weekend that deep structural changes “that could go right to the top” would  be made in the Aam Aadmi Party after its humiliating defeat in the Delhi civic polls last month, in which the party was able to win just 48 of the 270 municipal wards. He said Mr Kejriwal was  surrounded by “yes men” and had on their advice, blamed electronic voting machines or EVMs for the defeat.

To pacify Mr Vishwas, Mr Kejriwal on Sunday tweeted : “Kumar is my younger brother. Some people are trying to drive a wedge between us. They are enemies of the party. They should refrain. No one can separate us.” But 46-year-old  Mr Vishwas offered no comments and simply retweeted Mr Kejriwal.

Mr Vishwas has often been accused of planning to quit AAP and join the BJP ever since he praised Prime Minister Narendra Modi a few years ago. His party has always joined him in quelling the rumours, the latest being in January this year.

It was only two years ago that Mr Kejriwal had led the AAP to an electrifying victory in Delhi Assembly elections in which his party won 67 of the 70 seats.  Since then, two lawmakers have quit AAP and joined the BJP, which also snatched the Rajouri Garden seat last month in a by-election.

There are fears that after the party’s successive defeats in assembly elections in Punjab and Goa and then the Delhi civic polls, more disillusioned lawmakers may abandon the Aam Aadmi Party.