The police suspects it to be a case of honour killing as one of the deceased had married a local criminal’s sister against his wishes. 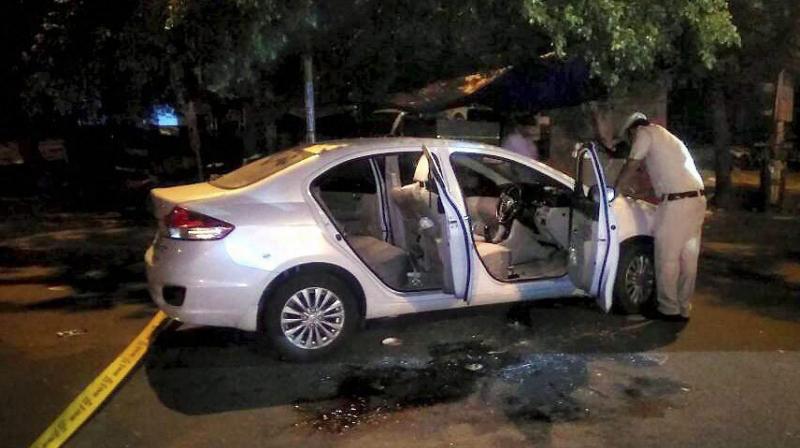 Police investigates after two rival gangs fired at each other in a gangwar in Delhi's Miyanwali area. (Photo: PTI)

New Delhi: In yet another incident of gangwar, three people, including a Delhi police assistant sub-inspector, were killed in a shootout in Outer Delhi’s Miyanwali area late on Sunday night. The shootout was reportedly between two rival gangs.

Bhupendra, a local criminal, and his friend Arun were in a car with police ASI Vijay and constable Kuldip at around 11.15 pm when a few unidentified men suddenly opened fire on them, said the police. “Bhupendra, ASI Vijay Singh and Arun died on the spot, while constable Kuldeep, who was also shot, is undergoing treatment at a hospital,” said a senior police official.

The police are yet to make any headway in the case and have detained several men for questioning. The police suspects it to be a case of honour killing. Bhupendra had married a local criminal’s sister against his wishes, setting off the events leading up to his murder.

Bhupendra, who has several criminal cases agai-nst him and deals in the property business, was accompanied by his friend Arun and personal security officers — ASI Vijay Singh and constable Kuldeep.

Around 11.30 pm, Bhu-pendra and Arun, along with the PSO’s, were seated inside a car near a market in Mianwali. Their car was intercepted by bike-borne assailants who opened indiscriminate fire at the car.

The occupants of the car were sprayed with more than 50 rounds of bullets. Constable Kuldeep managed to get out of the car and run for his life, but the others could not, said a local who witnessed the attack.

A police team reached the spot and took all of the injured to a nearby hospital, where they were declared brought dead. The injured cop, Arun, was taken to Balaji Hospital, where he is undergoing treatment. Sources have claimed that Bhupendra and Sonu, who were associates, had a falling out after which Sonu had tried to kill him and his wife on previous occasions.

On the direction of Delhi police commissioner, the case has been transferred to special cell. It was the second case of gang-war reported in the city with in a week. On April 29, a 38-year-old undertrial was gunned down by two people outside gate number 3 of Rohini court.