Justice Karnan had earlier said he will not appear before a medical board for examining his health as directed by the apex court. 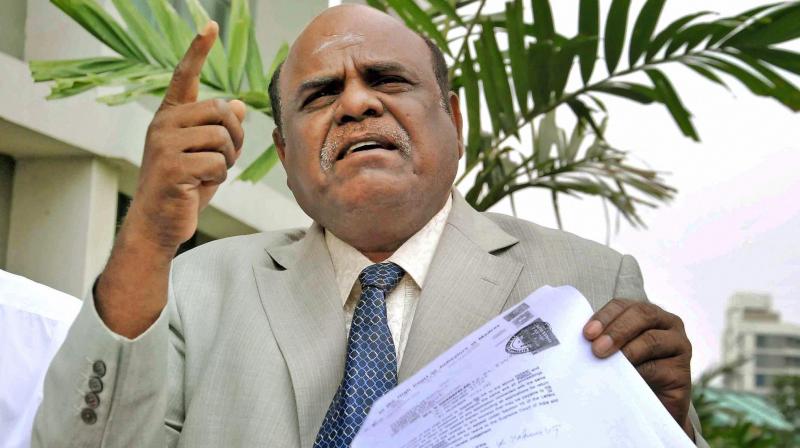 New Delhi/Kolkata: Calcutta High Court judge Justice CS Karnan on Tuesday ordered issuance of non-bailable warrants against seven judges of the Supreme Court, including the CJI, for not being represented before him, even as the Attorney General said he was not sure whether the "gentleman" would undergo medical tests as ordered by the apex court.

Justice Karnan, who ordered issuance of non-bailable warrants (NBWs) stating that top seven judges of the apex court have not been represented before him, directed the high court's registrar general to issue the NBWs to these judges to be executed through the Director General of Police or Commissioner of Police, New Delhi.

Justice Karnan passed a "suo motu judicial order in the interest of the nation to protect the general public from corruption and unrest", invoking Article 226 of the Constitution read with Section 482 Criminal Procedure Code.

"Today the accused judges are called absent no representation issue non-bailable warrant against the accused call on 08.05.2017 (sic)," the order signed by Justice Karnan said.

Meanwhile, Attorney General Mukul Rohatgi, who was today arguing in an Aadhaar matter before a bench comprising Justices AK Sikri and Ashok Bhushan, said he was not sure whether Justice Karnan would follow the direction given by a seven-judge bench on Monday to undergo medical check-up regarding his mental health in the contempt case.

"I do not know whether the gentleman, who was asked yesterday, would submit to the order of the seven-judge bench of this court," he said.

"I have read that he (Justice Karnan) has asked the seven judges of this court (who have passed the order yesterday) to undergo medical tests," he said while arguing in the Aadhaar matter about whether a person can be forced to give his finger prints.

The seven-judge bench, headed by Chief Justice JS Khehar, had taken note of the "tenor" of Justice Karnan's orders and press briefings and directed his medical check-up by doctors with police support, as the Calcutta High Court Judge did not appear before it.

Reacting to the order, a belligerent Justice Karnan had yesterday said in Kolkata that he will not appear before such a medical board as directed by the Supreme Court.

Taking note of the fact that Justice Karnan has been passing orders despite being restrained and holding press briefings, the apex court had said that "the tenor of press briefings as also purported orders passed by him indicate that he may not be in a position to defend himself.

"Therefore, we consider it in the fitness of the matter to require him to be medically examined. We hereby direct the Calcutta Hospital to constitute a board of doctors to examine Shri Justice CS Karnan and submit a report," the bench had said.

Talking to mediapersons in Kolkata on Monday, Justice Karnan had said he will not appear before a medical board for examining his health as directed by the apex court.

He had also threatened to "pass suo motu suspension order against the Director General of Police (DGP) of West Bengal, if the DGP functions against my wish."

Justice Karnan had on March 31 appeared before the apex court which granted him four weeks' time to respond to the contempt notice while rejecting the submission that his administrative and judicial powers be restored.