The weather stations at Palam, Ayanagar, and Jafarpur recorded maximum temperature at 46.1, 46 and 45.7 degrees Celsius respectively. 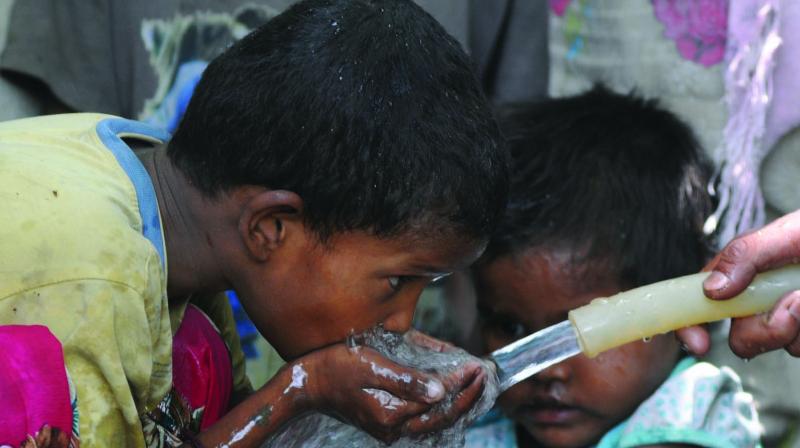 Children drink water from a pipe on a hot summer day in New Delhi on Saturday. (Photo: Biplab Banerjee)

New Delhi: The national capital continued to reel under blistering heat Saturday with the mercury crossing the 46-degree mark in some parts of the city.

The Safdarjung Observatory, which provides official figures for Delhi, recorded a high of 43.5 degrees Celsius, three notches more than the normal, and a low of 27.6 degrees Celsius. Humidity levels oscillated between 30 per cent and 56 per cent.

The weather stations at Palam, Ayanagar, and Jafarpur recorded maximum temperature at 46.1, 46 and 45.7 degrees Celsius respectively.

Mahesh Palawat of the Skymet Weather said heat wave conditions will persist in the national capital for another week and the maximum temperature will hover around 46 degrees Celsius.

Due to the easterly winds blowing in most parts of Uttar Pradesh and Delhi, maximum temperatures may drop by one to two degrees Celsius in the Delhi-NCR region, while the night temperature may increase by a few degrees, he said.

On Friday, the mercury hit the 47-degree mark, the season’s highest so far, in the diplomatic enclave of Chanakyapuri.