Encroachment in parks to be demolished

The petitioners said they shouldn’t be “singled out” when other religious structures are also situated in the area. 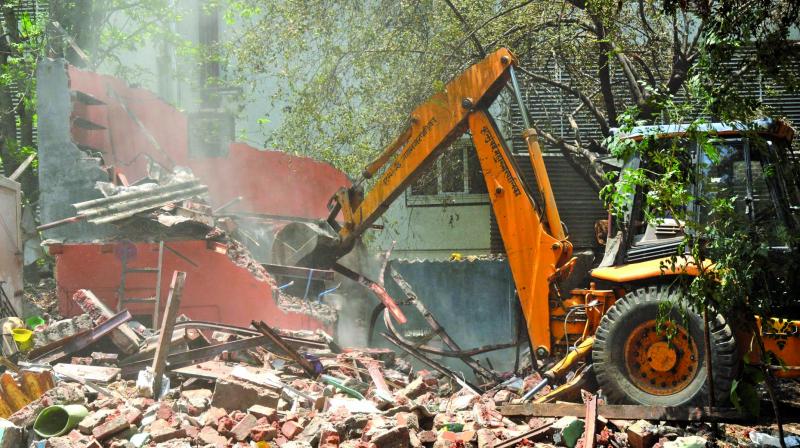 New Delhi: There is a good news in store for children and morning walkers of north Delhi as a government body has told the Delhi high court that it would raze all encroachments, including religious structures, from parks.

The Delhi Urban Shelter Improvement Board (DUSIB) told a bench of justice Vibhu Bakhru that demolition of illegal structures on government land at Metro Vihar Phase-1 and Phase-2 of Holambi Kalan area in north Delhi was planned on September 19, but could not be effected due to lack of police force.

The DUSIB’s response came on a plea by three individuals, who had alleged that the authorities had failed to take action against some religious structures located in various parks in metro Vihar’s vicinity.

In view of the board’s stand, the court dismissed their plea saying “the apprehension expr-essed by the petitioners that only one religious structure is being targeted is wholly unfounded”.

It also directed the police to “cooperate and provide necessary force to the DUSIB and the North Delhi Municipal Corporation to carry out the necessary action”.

Advocate Shahid Ali, ap-pearing for the three petitioners, claimed the authorities were only demolishing a mosque, Bilal Masjid, and were not taking the same action against other allegedly illegal structures located in the area.

They claimed that they should not be “singled out” and “removed” particularly when other religious structures are situated in the vicinity.

However, the DSUIB and NDMC opposed the petitioners’ contentions that the said structure being illegal was subject to demolition. They also said “there are encroachments on public places where other religious structures have been ra-ised and action is being carried against them.”