On Sunday, the maximum and minimum temperatures were recorded at 23°C and 9.2 °C, respectively. 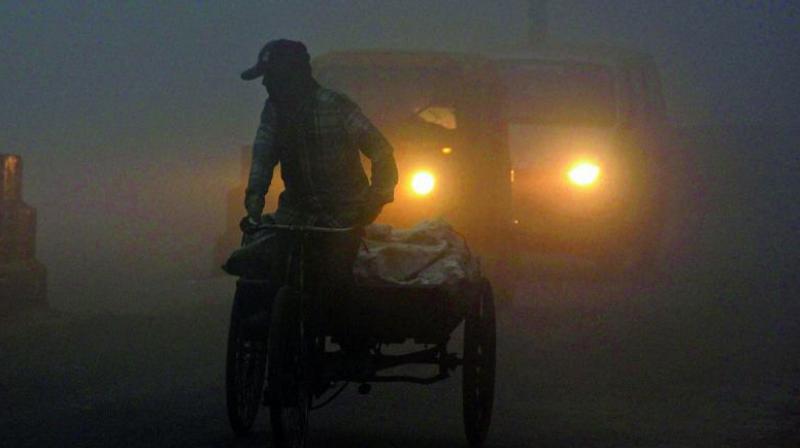 As many as eight international and 10 domestic flights because of the foggy weather. (Photo: PTI)

New Delhi: Thick fog enveloped most parts of northern India and Delhi on Monday, leading to cancellation of 12 trains. Over 50 trains were delayed, while 26 were res-cheduled due to bad weather, according to Northern Railways officials.

Flight operations at the IGI Airport were also affected. As many as eight international and 10 domestic flights because of the foggy weather.

According to Central monitoring agency SAFAR, the air quality index (AQI) was 341, at very poor levels. Dhirpur station recorded a maximum of 500 AQI, which falls in the “severe” category.

A cold morning greeted Delhiites on the second day of the New Year even as the minimum temperature rose to settle at 9.3 degrees, two notches above normal, while 53 trains were delayed due to fog.

The Met office has predicted partly cloudy skies for the day with the maximum temperature expected to settle at 21 degrees Celsius.

On Sunday, the maximum and minimum temperatures were recorded at 23°C and 9.2 °C, respectively.

Pollution monitoring agency SAFAR classified the air quality index in Delhi as “very poor”. According to it, average levels of PM 2.5 and PM 10 (24-hour rolling) at 152 and 267 micrograms per cubic metre, respectively.