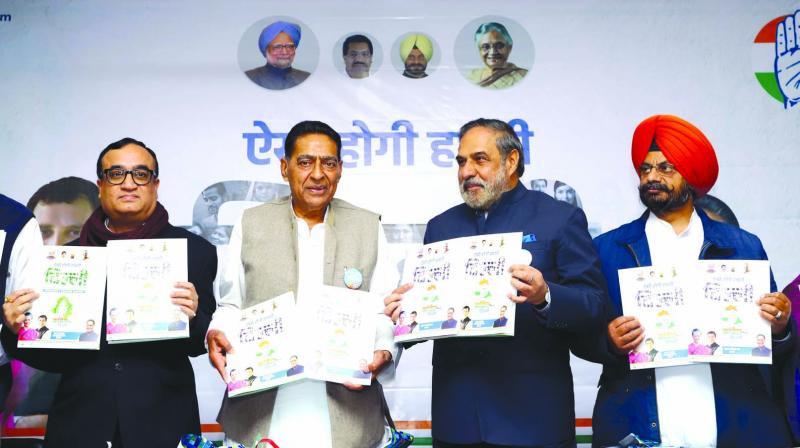 New Delhi: The Congress party on Sunday promised to implement unemployment allowance of Rs 5,000-7,500 per month, cashback schemes for water and power consumers, and challenge the contentious Citizenship Amendment Act in the Supreme Court if voted to power in Delhi.

In its manifesto presented by Delhi Congress president Subhash Chopra, the party also committed to spend 25 per cent of the budget each year on fighting pollution and improving transport facilities. The party has promised to provide free electricity up to 300 units per month.

Mr Chopra said Congress will open 100 Indira Canteens in the city to give subsidised meals at Rs 15.

Unemployment allowance of Rs 5,000 for graduates and Rs 7,500 for post graduates will be provided monthly under the Yuva Swabhiman Yojna, the manifesto said. The announcements come in the backdrop of promises and initiatives by its rivals AAP and BJP.

The party will challenge the CAA in the Supreme Court and demand the Centre to withdraw the law. The party will also not implement the proposed National Register of Citizens (NRC) and the existing form of the National Population Register (NPR) if voted to power in Delhi.

“We will get a strong Lokpal in the first six months,” Mr Chopra said. The Congress will launch flagship cashback schemes for power and water supply to benefit consumers saving these resources.

If voted to power, Congress will launch Sheila Pension Yojna under which Rs 5,000 per month will be provided to senior citizens, persons with disabilities, and transgenders. The manifesto also promised opening of a “Yaari Startup Incubation Fund” of Rs 5,000 crore to incentivise entrepreneurs. A major focus area of the manifesto is pollution mitigation and boosting public transport.

“We will make Delhi India’s first electric vehicle city via DEVI, the Delhi Electric Vehicles Initiative,” stated the manifesto, promising procurement of 15,000 electric buses. It also stated that the fares of the Delhi Metro will be subsidised for women, students and senior citizens. For students, a subsidy of Rs 300 per month will be given through direct benefit transfer.