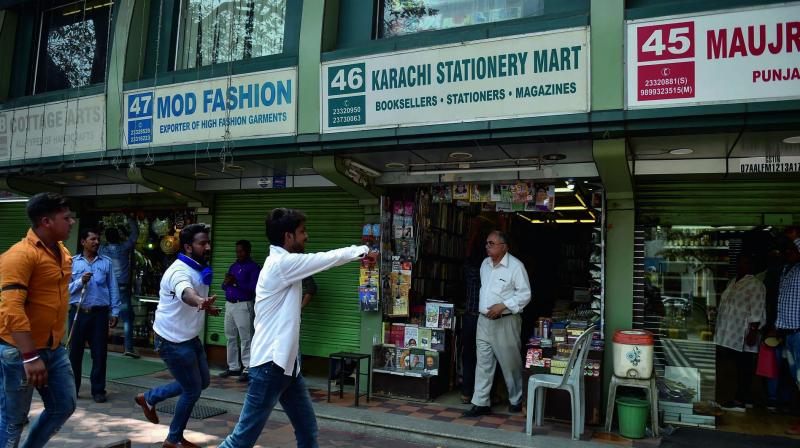 Protesters force shopkeepers to close their shops at Janpath in New Delhi on Monday. — PTI

New Delhi: Lutyens’ Delhi witnessed complete chaos on Monday as hundreds of protesters marched in unity against the dilution of the SC/ST Act. The protesters were agitating against the Supreme Court order banning automatic arrest and registration of cases for alleged harassment of Scheduled Castes and Scheduled Tribes.

The traffic at Mandi House came to a halt as the protesters blocked the road outside the Mandi House Metro Station.  Scores of people commuting from the area during the protest faced inconvenience while travelling towards ITO and other stretches. They were demanding that the provisions related to immediate arrest be restored. They also blocked one of the carriageways of Barakhamba Road affecting the traffic on the stretch, said the police.

Heavy police force was deployed at Mandi House in view of the protests. Shouting slogans of “Jai Bhim,” the protesters also blocked one of the carriageways of Barak-hamba Road affecting traffic on the stretch, police said.

In the national capital region, commuters had a tough time after 10 am in Noida and Gurgaon and many people on their way to office had to head back home.

A number of dalit organisations have called for a Bharat Bandh on Monday to protest against the Supreme Court order.

The police also closed the traffic movement on Sansad Marg from Patel Chowk to Jantar Mantar.

Protesters also squatted on tracks in several  places near Delhi, stopping trains, including the Dehradun Express and the Ranchi Rajdhani, to enforce the shutdown, said a railway official.

Services were disrupted when a mob arrived at the Ghaziabad yard around 10 am on Monday, Northern Railway officials said.  Many trains, such as Saptakranti Express, Utkal Express and the  Bhubaneswar and Ranchi Rajdhani as well as the Kanpur Shatabdi, were stopped ahead of Ghaziabad in Meerut and Modinagar, officials said.

Passengers, stuck for hours onboard trains in Rajasthan and Uttar Pradesh, tweeted to the railway ministry about the violence on platforms, stone-pelting and the lack of amenities in the trains. Some even said the tracks were uprooted in certain areas by the agitators, which the railways did not confirm. Some passengers onboard the Kota Jan Shatabdi Express were injured when protesters went on a rampage at the Faridabad New Town Railway Station.