For the Yamuna, the heat map suggests that dissolved oxygen level is below 2, way less than the normal levels. 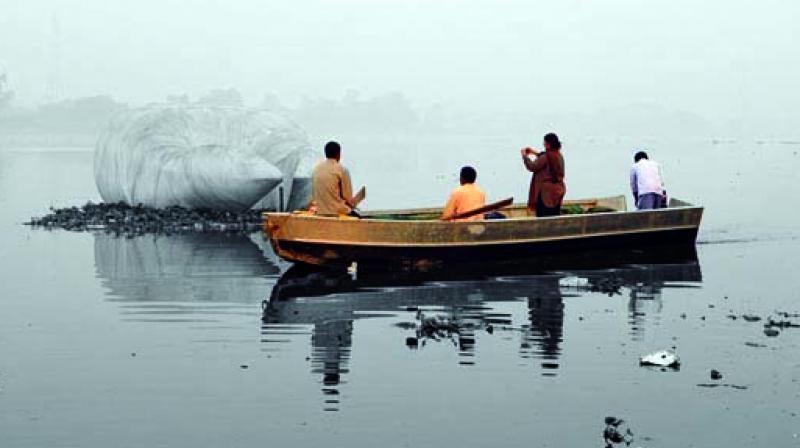 The team, which has been working on the Yamuna in Delhi for about 18 months, has collected close to 300,000 data points after conducting over 225 experiments across 11 locations.

New Delhi: Scientists sailed down a section of the Yamuna last week on a boat equipped with cutting edge sensors to map pollution hotspots and monitor water quality in real time instead of relying on time-intensive and expensive laboratory measurements.

At Nigambodh Ghat, scientists were able to find the exact locations where effluents entered the Yamuna along with a map which indicated the level of acidity, dissolved oxygen and organic matter among other factors that make the river water unfit for not just humans but also aquatic life.

This experiment was a part of Water-to-Cloud project developed by researchers at the Tata Centre for Development (TCD), University of Chicago, and the Indian Institute of Technology (BHU), Varanasi, in collaboration with International Innovation Corps.

According to s senior scientist, the main aim of the project was to provide a holistic water quality monitoring platform and pinpoint the hotspots of pollution in major Indian water bodies, including the Ganga and Yamuna and other important lakes, using sensors that send real-time data to a hand-held device in the form of easily readable maps.

Water-to-Cloud programme manager Priyank Hirani said that the project explores the benefits of continuous, real-time, and in-situ water quality monitoring system that would act as an early warning system. Mr Hirani also explained that the system uses powerful data visualisations in the form of heat maps that can be used to dynamically monitor, predict, and regulate water quality.

The team, which has been working on the Yamuna in Delhi for about 18 months, has collected close to 300,000 data points after conducting over 225 experiments across 11 locations. The researchers said while mapping the river chemistry, it emerged that the level of dissolved oxygen in two stretches of Ganga is often below the standards, and alarmingly low in the Yamuna.

When it comes to turbidity, which is a direct result of effluents from urbanised zones, large water bodies monitored in the study, do not perform well. For the Yamuna, the heat map suggests that dissolved oxygen level is below 2, way less than the normal levels.

Mr Hirani said that the current methods of river water quality monitoring in India rely heavily on lab measurement, which is time-intensive and expensive and is done on a per sample basis. Moreover, he said that lab analyses from point measurements may not always give a holistic picture of the health of rivers as they are dynamic ecosystems and require continuous monitoring.

Mr Hirani said, “The project leverages the benefit of sensor technology, which is becoming more affordable. The sensors, which have a wide range in terms of values they can record, are attached to a boat that goes on a pre-defined route.”

After the data is recorded real-time, it is downloaded from sensors, cleansed and uploaded to a user-friendly and open-access platform.