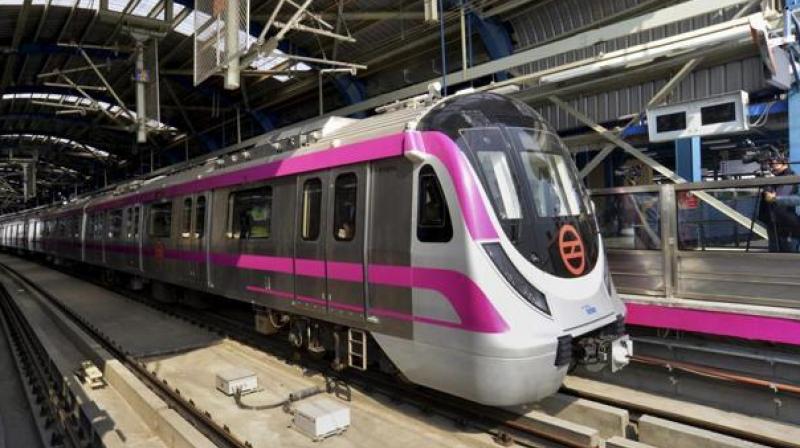 New Delhi: Seeking to ensure smooth flow of commuters at new interchange stations of a recently-inaugurated corridor of the Magenta Line, the Delhi Metro has installed a total of 16 new automatic fare collection gates at the two facilities, officials said on June 3.

Besides, the Delhi Metro Rail Corporation recently, has also increased the frequency of trains on a few lines in, and now all trains coming from the Vishwavidyalaya station are terminating at HUDA City Centre, a senior DMRC official said.

"Earlier some trains would terminate at Qutub Minar station. Thus, the frequency of trains between Qutab Minar-HUDA City Centre stations has also increased from every 4 minutes and 11 seconds to 2 minutes and 47 seconds," Executive Director, DMRC's Corporate Communications, Anuj Dayal, said.

The 24.82-km Janakpuri-Kalakji Mandir section of the Magenta Line was opened to the public on May 29, which has 16 stations -- 14 underground, two elevated -- including one that caters to travellers moving in and out of the domestic terminal of the city airport (Terminal 1- IGI Airport station).

The five-level new Hauz Khas station (with Yellow Line) and Janakpuri West (Blue Line) station are the interchange facilities, and with the opening of the new corridor, more commuters are using the two stations. "With a view to ensure smooth movement of commuters at the new interchange stations of Line-8 (Magenta Line), 10 extra automatic fare collection (AFC) gates have been installed at the new Hauz Khas station and six extra AFC gates at Janakpuri West station," the senior DMRC official said.

Also, recently, three more trains each have been added on the Red Line (Rithala-Dilshad Garden) and the Blue Line (Dwarka Sec-21-Noida City Centre), increasing the total number of trains to 29 and 64 respectively, the DMRC said. "Similarly, on Yellow Line (Samyapur Badli-HUDA City Centre), the total number of trains have been increased to 55 from 54.

The increase in the number of trains has also resulted in an increase in the total number of train trips on these lines; on the Red Line being 25 more trips, and 43 more trips on the Blue Line. The total train trips have increased from 3,650 to 3,735 across the network, including the fully operational Magenta Line. The entire Magenta Line (37.46 km) spans from Botanical Garden to Janakpuri West stations. The 12.64 km Botanical Garden-Kalakaji Mandir corridor was inaugurated on last December 25.

Besides, at 29 m, the new Hauz Khas station on the new corridor of the Magenta Line is the deepest metro station in the entire network and an engineering landmark as its tunnel goes beneath that of the existing station on the Yellow Line.