The idea is to come up with a holistic parking policy for the city, which also addresses needs of pedestrians. 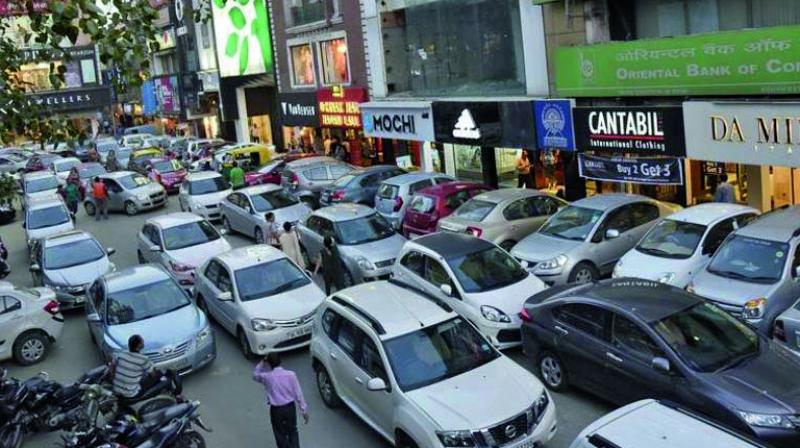 SDMC is the nodal agency engaged for the parking management area plan (PMAP) for the national capital, being firmed up by the Delhi government to decongest the city and also make it pedestrian-friendly. (Photo: File)

New Delhi: From app-based lot booking system to pedestrian-friendly model parking zones, the civic body in south Delhi is ramping up its "smart parking" infrastructure while encouraging people to use public transport to reach markets.

A top official of the South Delhi Municipal Corporation (SDMC) said it has adopted a "community-led development policy" under which marketing associations and resident welfare associations (RWAs) are being engaged to come out with "win-win" initiatives.

"We have leveraged technology in booking parking lots and there is a mobile app for booking the facility. People in marketing areas don't get a paper slip, but a notification on phone when they book it. Also, people can pre-book a slot like a seat in a movie theatre," said Prem Shankar Jha, Deputy Commissioner, R P Cell at SDMC. He said several rounds of discussions have been held with representatives of marketing associations and RWAs to encourage them to contribute towards making markets a decongested and pedestrian-friendly as possible. "And, results have been very positive.

A free e-rickshaw service has been started recently by the Central Market Association of Lajpat Nagar for providing last-mile connectivity for shoppers who are coming to the place via metro," he told PTI. Ten e-rickshaws are currently being used and it also helps decongest the place, which makes shopping a more pleasant experience.

"In all great cities, be it London, Paris, Berlin, Shanghai, streets in market areas are kept either pedestrianised or as much traffic-free as possible. Shopping experience is enhanced if less cars are around and people can stroll around with period furniture installed to aesthetically enhance the look-and-feel of the place," Jha said.

Many traders initially used to think that more cars near their shops meant more business, but it is the other way around, as harried shoppers would not spend much time in the market, he said.

Incidentally, the SDMC is the nodal agency engaged for the parking management area plan (PMAP) for the national capital, being firmed up by the Delhi government to decongest the city and also make it pedestrian-friendly.

According to the plan, civic bodies in Delhi will levy one-third charges for multi-level parking facilities compared to surface parking rates, and parking within 25 m from roundabouts and traffic intersections would be disallowed, among other measures.

"The idea is to come up with a holistic parking policy for the city, which also addresses needs of pedestrians. We also want to discourage long-term surface parking and incentivise multi-level parking to keep the city decongested," Jha said.

The SDMC, meanwhile has identified Lajpat Nagar and Kailash Colony areas for model parking facilities, which would be developed according to the parking plan that also envisage to address spill-over of vehicles.

"We are also in the process of having 'parking mitras' who will help people and also raise awareness about the policy," he said.