Seven policemen, including an assistant commissioner of police, were injured during the protest. 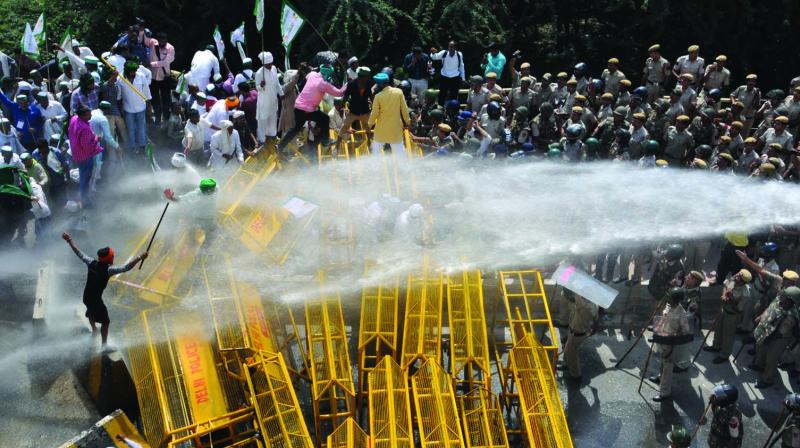 A protestor climbs on police barricades while an elderly farmer clashes with police personnel during a protest at Delhi-UP border during the ‘Kisan Kranti Padyatra’ on Tuesday. Seven policemen, including an assistant commissioner of police, were injured as protesting farmers turned violent while trying to enter the city from Uttar Pradesh in defiance of prohibitory orders, the Delhi Police claimed on Tuesday. (Photo: G.N. JHA, PTI)

New Delhi: Chaos prevailed in Delhi’s Ghazipur area on Tuesday as the Bharatiya Kisan Union’s (BKU) Kisan Kranti Yatra got violent with police resorting to firing water cannons and teargas shells to keep the angry farmers from entering into Delhi.

A standoff between farmers and police happened at Delhi-UP border after the protestors tried to defy the prohibitory orders and wanted to storm into national capital.

Several farmers were injured while the Haryana unit chief of the BKU was unconscious after a tear gas shell exploded close to his face.

Seven policemen, including an assistant commissioner of police, were injured during the protest.

The prohibitory orders in east and northeast Delhi were imposed by the city police on Monday evening, anticipating law and order problems as thousands of BKU members had declared a march from Hardwar to reach the national capital on Tuesday. While in east Delhi, the prohibitory orders under section 144 of the Criminal Procedure Code (CrPc) will be in force until October 8, they will remain in force till October 4 in northeast Delhi.

The police had to use water cannons and tear gas to disperse the protestors, who also indulged in sloganeering.

Delhi police commissioner Amulya Patnaik along with other senior officials personally visited the spot and supervised the arrangements, and maintained constant liaison with their counterparts. “Nearly 2,500 personnel from Delhi Police, besides paramilitary forces, including the Rapid Action Force (RAF), have been deployed,” a senior police officer said.

Farmers marching towards Delhi were stopped at the Delhi-Uttar Pradesh border, as they tried to run through the border, surmounting the barricades.

The farmers, riding tractors and trolleys, broke barricades of the UP Police and then started proceeding towards the barricades put up by the Delhi Police, a senior police officer had said earlier.

Despite persuasive methods requesting them to wait till outcome of talks of their leaders with the government, a section of the crowd turned violent and tried to break barricades forcefully through tractor-trolleys and were also carrying lathis, said Delhi police on Tuesday’s action on protesting farmers.

Defending the crackdown, which left many farmers injured, deputy commissioner of police (east) Pankaj Kumar Singh said permission to hold the march had been denied and the farmers’ entry to Delhi was illegal.

Heavy traffic congestion was reported on the DND (Delhi Noida Direct) flyover, Apsara border, GT Road, Vikas Marg which are used by motorists for commuting between Delhi, Noida and Ghaziabad, the police said.