Over 1500 SFI activists take out protest march against ABVP, RSS. 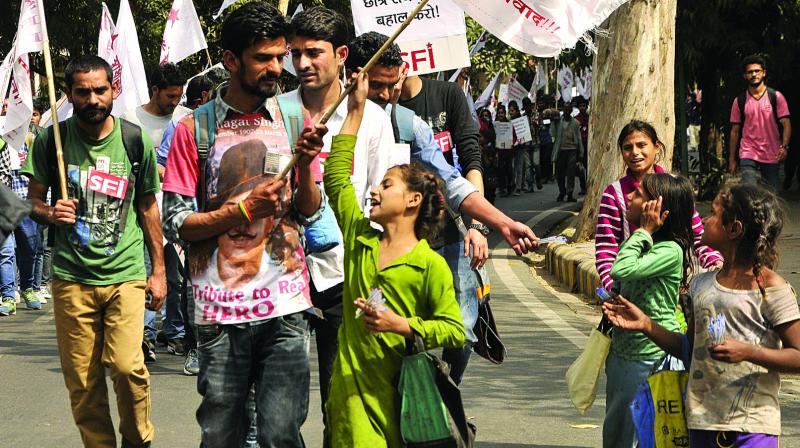 “We took a delegation to meet the L-G, seeking his intervention in the issue of the anti-national activities taking place in JNU and DU since a year. We submitted a memorandum to him demanding strict action against those who indulged in such activities,” Saket Bahuguna, ABVP’s national media convener said.

The RSS (Rashtriya Swayamsevak Sangh) affiliated student wing was assured by the L-G that he would speak to the Delhi police about their demands.

“The police has not been in a position to file a charge sheet against the students of JNU under sedition charges till date. The police has also not filed separate FIR in the Ramjas (College) incident,” the memorandum said. The team also asked the L-G for a probe into the alleged rape threats to Gurmehar Kaur, a student of Lady Shri Ram College and a martyr’s daughter, who had started a campaign against ABVP.

“We also condemn the violence of their cadre to kill innocent ABVP karyakartas in Kerala and spreading false propaganda in Delhi,” the memorandum added.

Meanwhile, the NSUI (National Students’ Union of India) approached the police and the DU administration demanding the removal of the “provocative” hoardings put up by the ABVP. The Congress-affiliated student wing objected to the hoardings put up by ABVP at various places in the campus, which purportedly showed “violence perpetrated by the Communists.”in various parts of the country.

‘DU against intellectual terrorism,’ ‘Rapist AISA go back,’ ‘DU against anti-nationals’ were a few of the slogans written on the posters. It drew sharp reactions from the Left-affiliated groups.

On the other hand, over 1,500 activists of the Students Federation of India (SFI) also held a protest march from Mandi House to Jantar Mantar on Friday against the RSS and alleged goondaism of its student wing ABVP.

The protesters condemned the ABVP for allegedly attacking free speech in universities and triggering violence and RSS for influencing the National Education Policy (NEP).